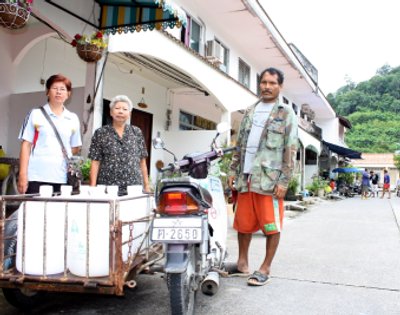 PHUKET: Residents in parts of Phuket’s Kathu District are angry with local authorities because their water supply, cut off on Monday, was only restored this afternoon.

Residents of the Baan Neua and Moo Baan Pak Dee communities, off Wichit Songkraam Road, contacted the Gazette at 10am to complain about the shortage, which forced students to go off to school without a shower for the third day in a row – or required them to bathe in drinking water.

At 10am this morning residents lined the streets of the two villages, waiting for a water truck to arrive and fill 10-liter plastic containers to help them get through the day.

Mrs Jintana Wisetratone, one of the approximately 1,500 residents of the two communities, said local authorities made no effort to announce that a service disruption of such length was coming.

The 64-year-old said she never thought such a thing could happen in Phuket and wanted to publicize the community’s plight through the media.

Residents had to shower at their places of employment and there was no water to wash dishes and cutlery after meals, she said this morning.

She said she was forced to buy 10 ten-liter containers of drinking water at a cost of over 100 baht per day just to get by.

“I have no idea why the water stopped. No government officials have been round to explain what is going on,” she said.

Residents were so frustrated with the situation that some sarcastically put “For Sale” signs up in front of their homes.

They also tried to call the offices of the Provincial Waterworks Authority, located at Bang Wad Reservoir just two kilometers away, but nobody there answers the phone, they complained.

He assured the Gazette that service was restored in the area this afternoon.

The service disruption started on Monday and was required in order to hook up new water mains to the distribution network, according to a press release issued late last week.

However the press release failed to mention how long the shortage would last and didn’t specifically list the 550 households of Baan Neua and Moo Baan Pak Dee as among the communities that would be affected.