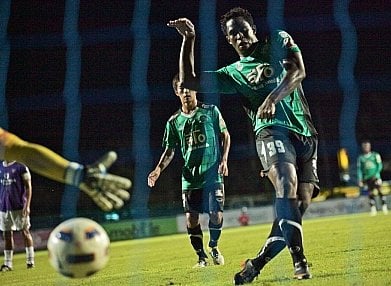 After a 4-1 win over Chainat FC on Saturday, a buoyant Phuket were certainly in goalscoring form and needed to consolidate their first league victory in six games. A solid win over a BCC team sitting at fifth in division two of the AIS Bangkok Metro Regional League would fit the bill.

Cup competitions in football invariably draw teams together which equate to the “David and Goliath” euphemism. And every now and again a “giant-killing act” is performed, but BCC forgot their sling-shot and Kone Adame squeezed any fight from the Bangkok minnows.

Scoring opportunities came fast and furious from the kick-off with both sides just missing the mark. On 13 minutes the crowd came to life during a Phuket counterattack along the left wing. Kone Adame took on three defenders and caught the goalkeeper diving early to his left to slip the ball past his right foot.

Three minutes later Kone had worked his way to BCC’s end-line. His attempted cross rebounded off a defender, but the big Ivorian reacted well and his half-volley pass was netted by a Seksit Srisai volley to put Phuket 2-0 ahead.

In the 36th minute, BCC showed a little spark of resistance when a perfectly timed through ball was collected by Narakhorn Khana and he sublimely chipped over the advancing Phuket goalkeeper Leuchar from the right edge of the penalty area.

A 44th minute corner saw Nene Bi Tre Sylvestre tower above two defenders and direct his header down into the left corner for 3-1 scoreline at half-time.

BCC brought the game within reach nine minutes after the restart when Khana’s left foot strike skewed into the net at Leuchar’s near post off Wiratoj Janteng’s shins, making the score 3-2.

Moments later Kone Adame scored his second after controlling a cross with his chest and squeezing a shot under BCC’s goalkeeper.

In the 64th minute Seksit exposed a flat BCC defense and had plenty of time to pick his spot and score Phuket’s fifth.

Kone doubled his tally in the space of six minutes with a simple tap in from two yards in the 73rd minute and finished a powerful surge into the BCC penalty area with a near-post strike on 79 minutes.

Kiratikorn Nilamat posted a consolation goal and BCC’s third near the end of the game with a well struck penalty past Leuchar’s lunging right hand to end the game with a score of 7-3.

Other FA Cup 2nd round results from Wednesday:

The remaining six pairs of the Thai FA Cup’s second round are scheduled to play next Wedneday, June 22.

The Phuket Gazette will bring you the results to see who FC Phuket will be matched with in Round Three.

Meanwhile, FC Phuket will hit the road to play in another cup game this Saturday at 4pm against Thanyaburi United in Pathum Thani.