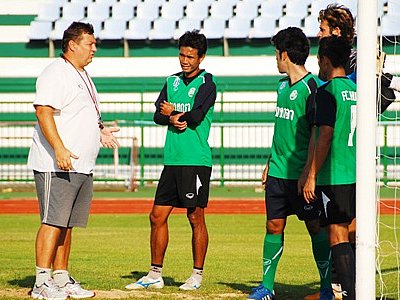 Kick off is scheduled for 4pm on Saturday against Rajpracha FC from Nakhon Pathom province, who finished one place ahead of Phuket in eighth spot at the end of last season.

Controversy surrounded their first meeting in February last year when it emerged that Rajpracha had fielded too many foreign players during their 1-1 draw at Surakul Stadium. Following official protests, Phuket were eventually awarded extra points as a result of Rajpracha’s infringement on the foreign player rule.

The teams played out a scoreless draw in the return match at the end of July.

The game will start at 4pm because the floodlight system at Surakul Stadium is currently being repaired in preparation for the National Youth Games which have been postponed until May from their original dates in March.

“Normally, home games will start at 6pm, but Phuket Provincial Authority Organization (OrBorJor) are now in a hurry to fix the lighting system for the Games and to meet Yamaha League One standards. We have to start at 4pm until the lights are ready, which should be for the third home game with Suphanburi FC on April 21,” said Phuket’s manager Soranan Sanae.

Brazilian midfielder, Marcio Santos, will again not feature for Phuket as his transfer papers have still yet to be processed.

Phuket coach Milos Joksic said he was not overly concerned about Santos’ absence.

“I cannot use Santos for tomorrow’s game, but I am not much worried about that because I have trained my players in different tactics. During training, I focus on set pieces. I hope they have understood what I have taught them and that they will perform as they did in training. Rajpracha is a very good team, I know them. But I am sure my players will work very hard to gain three points at home.”

Coach Joksic, however, would not reveal his starting 11 team.

“I have in my mind now who will be the first 11, but I never tell anyone in advance. The players will know just before the game. This is my style,” he said.

Manager Soranan also asked fans to buy season tickets that allows them to watch every home match for free. “Fans who want to book for year tickets, can do with our staff at the entrance,” he said.

“The year ticket is 2,000 baht which also gets one team shirt, one team scarf and one cap,” he added.

Entrance fee is 80 baht for adults and 20 baht for children.