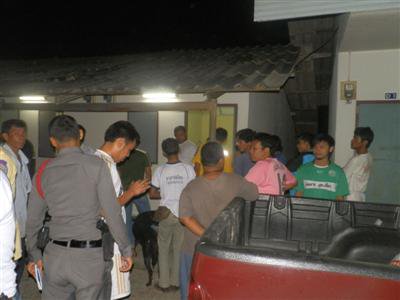 Thalang Police Duty Officer Somkhit Khaosang was notified of the death by neighbors at 7:20pm.

At the scene, a rented room in Srisoonthorn Village 5, police found the body of 51-year-old Uthai Chuti-anan lying face up on a mattress under a mosquito net.

Kusoldharm Foundation workers who arrived with police were saddened to learn that the deceased was their friend and fellow volunteer, formerly serving with the Cherng Talay unit.

A friend and fellow volunteer said the deceased had not reported for duty for some time, but kept in close contact via his two-way radio, which was found at the scene.

The friend said Mr Somkhit was separated from his wife, with whom he had two children.

He worked as a limousine driver at Phuket Airport and stayed by himself in rental rooms in a number of different locations in Thalang until his passing.

He checked into the rental room in Village 5 about three days before.

Neighbors started to worry when they saw his motorbike parked out front and noticed he had not gone to work.

There was no answer when they knocked on the door to check on him, so they told the owner of the unit, who also happens to be the local village chief. The owner opened the door to the room and made the discovery, then notified police.

Finding no signs of foul play, police turned the body over to Kusoldharm workers for transport to Thalang Hospital.

Police believe Mr Somkhit died of natural causes about 12 hours before the discovery of his body. The Kusolharm Foundation workers concurred.