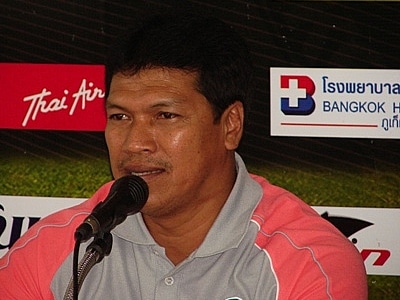 PHUKET: After a series of ten consecutive losses and draws, FC Phuket won their first road game against a luckless RBAC side in Bangkok yesterday afternoon.

FC Phuket scored the only goal of the match just two minutes into play, when a long pass from Nittiroj Sukuma was chested down inside the penalty area by Watcharapong Jun-ngam, then deftly passed to waiting Nigerien midfielder Boubacar Issoufou, who slotted the football inside the near post.

To view the goal click here (scroll past the Thai language report to the first video).

Last in the table and almost certain to be relegated to the regional league next season, RBAC played like a team with nothing to lose. Going on the attack, they had all of their scoring bids foiled by a composed FC Phuket defense and goal keeper Jonathan Matijas, who was named man of the match.

After the match, FC Phuket coach Sompong Wattana said he was pleased to finally see his boys notch up their first road victory of the season.

“I have to credit RBAC, who played well. Managing to get a goal so early in the match made play a lot easier for us. I apologize for the formation we used after that, but we weren’t doing it to taunt their side in any way,” he said.

The win moved the Southern Sea Kirin up to eighth place in the 18-team Division 1 and will give them momentum going into their Wednesday night match against Phattalung FC at Surakul Stadium, a game they must win to reach the semi-finals of the Toyota League Cup.

In other Division 1 matches over the weekend:

No drama for Phuket pilots in Taiwan