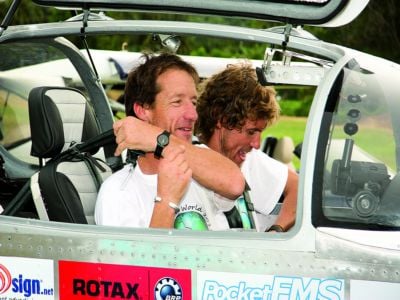 PHUKET: A website report this morning of a “dramatic near miss” involving two aircraft on the ground at Taiwan’s Taoyuan International Airport has come as a surprise to at least two of the pilots.

Contacted by telephone in Taiwan early this afternoon, South African pilot James Pitman was clearly astounded by the report, saying that at no time was his aircraft anywhere near the China Airlines jet that had aborted its takeoff on Friday afternoon.

“We were not even on the same runway,” Mr Pitman told the Phuket Gazette, adding that after landing he was in routine contact with ground control and proceeded to the tarmac “completely normally”.

Mr Pitman pointed out that, had there been a “near miss” he and his co-pilot Jean d’Assonville would have been summoned by the local aviation authorities to assist in a rigorous investigation

However, Taiwan’s Civil Aviation Authority (CAA) has officially rebutted the occurrence of a “near miss”.

A report of that rebuttal was placed online at about 6pm yesterday.

The two South African pilots, currently on a round-the-world flight in an experimental aircraft built by themselves, are now scheduled to depart Taiwan for Guam tomorrow or Tuesday, depending on weather.

They had planned to fly to Japan after Taiwan, but their request to land there was rejected because of their airplane’s ‘experimental’ status, Mr Pitman said.

A full report of the pilots’ visit to Phuket will appear in the next issue of the hard-copy Phuket Gazette, due out Friday afternoon. Digital subscribers will be able to access the report here.