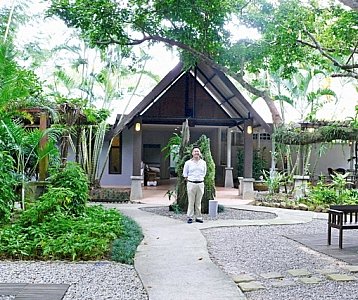 PHUKET: Sex, gambling, drug and alcohol addictions in Asia are on the rise as a by-product of the region’s rapid economic development.

Until recently, treatment facilities in Asia for those suffering from substance addictions, compulsive behavior and resulting mental issues have not kept pace with societal changes.

“We are seeing a big rise in the use of alcohol, drugs and social behavioral addictions like gambling, technology and sexual compulsivity in Asia,” said Dr Kai Goh, CEO of Bhavana, a rehab center which opened earlier this month at at Cape Panwa.

Dr Goh said that the increasing demand for treatment centers in Asia is also due to growing affluence.

“We want to fill the big gap that is emerging when people realize they have problems they cannot cope with by themselves and need professional support,” he said.

That is why Dr Goh – who trained at Imperial College and the Priory Clinic in London – decided to set up Bhavana in Phuket.

“Phuket is the right location for what we are trying to do. It is associated with relaxation and recovery and offers a very healing environment surrounded by the sea,” he said.

“Moreover, Phuket is very well connected, so we can get patients not only from Thailand but around the world,” he added.

Dr Goh also cites the existence of established Alcoholics Anonymous and Narcotics Anonymous networks in Phuket as a reason for his choice, as well as the higher tolerance Thais exhibit towards people with these kinds of problems compared to neighboring countries.

Bhavana is the first establishment in Asia to offer an integrated model rehab clinic. On-site it treats the physical aspects of addiction through detox, as well as therapy – both clinical and holistic.

The treatment center is licensed to administer medication, run a pharmacy and have doctors and nurses present 24-hours a day.

“This allows for a very seamless transition, as the patient will not be jumping from rehab to hospital and back to receive medical treatment, and will also not be kept at a hospital for extended periods of detox.

“It ensures you are not wasting your time between medication administrations, and allows for solid relationships between patient and therapists to form,” Dr Goh says.

Additionally, the center has close links with Bangkok International Hospital, where the doctors at Bhavana can admit patients directly should a serious medical condition arise, such as seizures or shock from withdrawal.

This close relationship also complements the more cutting-edge and advanced treatments Bhavana employs, from brain scans to the use of hyperbaric chambers.

Formerly a resort, the four-rai site and center is simple, safe and secluded. With the ocean as its backdrop, you can see almost all of the facilities from the reception area.

In addition to the canteen, which provides three nutritionally balanced meals a day, there’s a pool, therapy rooms, the clinical wing, a recreation room and bedrooms.

The center currently caters for up to nine patients and is already at more than half occupancy after just a few weeks since the soft opening. Patient privacy and protection is of utmost importance at Bhavana, and the Phuket Gazette was not allowed interaction with any of them.

Dr Goh reveals that there has been a lot of interest from overseas and many advance bookings, with high season expected to be the busiest time.

So far, they have had Europeans, Thais and Phuket expats come and stay in the rooms, which have been redesigned and enhanced for safety to minimize patients’ risks to themselves.

The cost of a stay at Bhavana varies according to the clinical treatments and length of residence. On average, a stay of about a month costs 600,000 to 750,000 baht).

Bhavana is part of a global network of top rehabilitation establishments, with resident therapists from The Priory in London and centers in Arizona and California on the international advisory board and visiting regularly.

“We aim to be an international center of excellence, but I think there is a need for it in Phuket’s local and expat community as well,” Dr Goh says, stressing the trends of alcoholism and prescription drug abuse that have been emerging here.

Craig Gagnon MA, one of the resident therapists from the US who trained at the Mayo clinic and has 15 years experience working in Bangkok, agrees.

“Compared to the West, in Thailand you see more alcohol and prescription drug abuse, specifically sedatives and benzodiazepam [Valium and Xanax]. These can be bought over the counter here but aren’t as accessible in the West.

“Some areas of the medical profession here will give you medicine that practitioners in the West would be more hesitant to prescribe, and without as many follow-ups. So we see a lot more foreigners getting addicted to pharmaceuticals here.”

Dr Goh is also quick to point out the benefit that Phuket residents have by being able to take full advantage of all the center has to offer, from interventions to aftercare.

If you are struggling with an addiction but are unsure about getting help, the center offers seven-day “tester” programs. Read more at bhavanaphuket.com

Phuket Gardening: Delving into the Dragon

Phuket’s Brush film fest a must