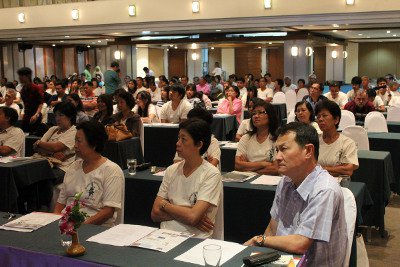 PHUKET: Experts speaking at a public forum held in Phuket Town last week have voiced their strong support for Phuket to be designated a “Special Administrative Zone”, saying the move would pave the way to resolving many of Phuket’s long-standing problems.

Dr Chantinee Boonchai, assistant to the president for Organization and Collaboration Development at the Prince of Songkla University (Phuket Campus), addressed the crowd of more than 200 attendees at the Phuket Merlin Hotel on June 24.

If Phuket were to become a “Special Admin Zone” it would go a long way to help the island’s administrators draw up and implement a long-term plan for sustainable development, he said.

The move would allow Phuket – like Pattaya and Bangkok – to elect its own governor and would give local authorities more power in devising and enforcing regulations for local benefit, and allow them greater self-determination in sourcing much-needed funding for public projects.

He identified the degradation of natural resources, trash, water pollution and diminishing watershed areas as the top problems to be addressed.

After receiving much strong, positive feedback from those present at the meeting, the expert panel – comrpising local businessman Chan Wongsattayanon; Jeerasak Tortip, Assistant to the President of the Phuket Provincial Administrative Organization (OrBorJor); and Dr Pridi Chotechuang, a senior officer at the Ministry of Interior’s Community Development Department – came up with three main action steps which they say are imperative:

First, the central government needs to urgently transfer the power to manage Phuket to Phuket officials.

Second, the government has to distribute enough budget for Phuket authorities to develop the province and solve the problems.

Third, the government has to allow all citizens the opportunity to actively take part in the formulation of provincial development plans.