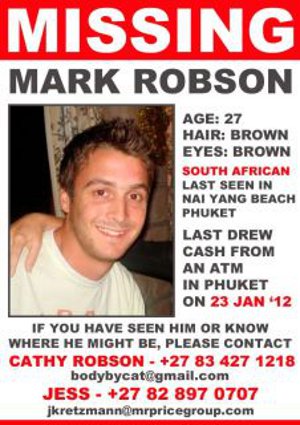 PHUKET: The mother Mark Robson, a 27-year-old with British and South African nationality, is seeking help to find her son who went missing in Phuket last month.

Mr Robson arrived in Thailand from Durban on December 5. After short stays in Bangkok, Koh Phangan and Koh Samui in mid-December, he stayed in Phuket.

He was in regular email contact with his mother Merneen Robson, keeping her abreast of his movements.

Mr Robson was known to have been in Patong until January 1, staying at Martini House and The Good Nice Hotel.

From there he moved to Karon, where he stayed at an unknown location for three days before finally booking in at the The Old Phuket resort.

Around January 12, he moved north to Nai Yang Beach, just to the south of Phuket Airport, to escape the crowds and be closer to the airport.

His mother Merneen Robson wrote that her son kept in regular contact by email, until his final message sent on from Nai Yang Beach on January 15.

“We have not heard from him since. He hired a motorbike for the day on January 14.”

Mark was was due to fly from Phuket to Taipei on February 6 to take up a teaching position there on February 8.

Bangkok Airways confirmed he did not catch the flight. Mrs Robson began to worry after receiving a call from his employers in Taipei to say he never arrived.

Mrs Robson believes Mark was traveling alone, except for meeting up with two girls in Koh Samui that he might have known from Maritzburg Varsity, a South African rugby club.

“He withdrew money from an ATM near The Old Phuket on January 10 and then drew on his Travelex card on January 23. He may still have been in Nai Yang Beach, possibly not. This was his last withdrawal,” she wrote.

Mrs Robson has contacted the British Embassy and the SA Embassy, but they have no information apart from the fact that he is not in prison.

Members of the Phuket Tourist Police Volunteers are involved in the search effort.

Anyone with information that could lead to discovering the whereabouts of Mark Robson should contact Cathy Robson (Tel: +27-834271218; Email: bodybycat@gmail) or Jess (Tel: +27 828970707; Email: jkretzmann@mrpricegroup.com).