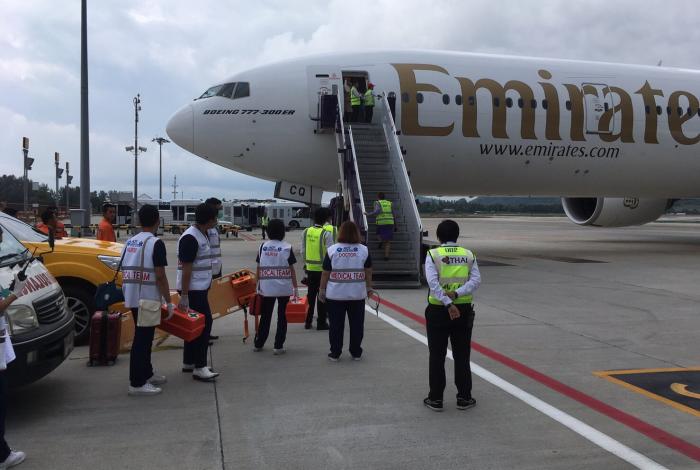 PHUKET: Emirates Airlines pilots called in for an emergency landing at Phuket International Airport yesterday afternoon, after a passenger lost consciousness and required medical treatment. He was later pronounced dead at a Phuket hospital.

The passenger, whose name is being withheld until his family has been notified, was reportedly feeling sick on board the aircraft and eventually passed out. It was initially believed that the man had suffered a heart attack.

The flight, EK-346, had departed from Dubai and was heading to Kuala Lumpur.

“Cabin crew notified the pilots, who then re-routed the flight to make an emergency landing in Phuket. Once on the ground, medics administered first-aid on the 39-year-old Somalian man and sent him to Thalang Hospital,” confirmed Lt Sunan Petnhu of Thalang Police. “The man was reportedly travelling to Malaysia to get treatment for cancer.”

The flight continued on Kuala Lumpur at 2:20pm, about two hours after the emergency stopover.