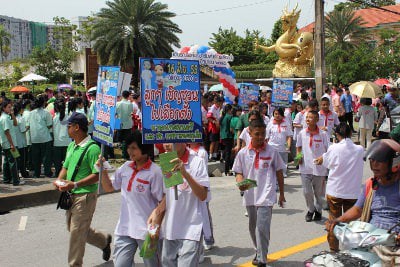 PHUKET: The Phuket Election Commission (PEC) has confirmed that the sale of alcohol will be banned in Phuket Town from 6 pm on Friday until midnight on Saturday as the elections for Phuket City Municipality mayor and the municipal council take place this weekend.

The ban affects, among other businesses, all bars, restaurants, nightclubs and mom-and-pop-stores.

“We want to encourage people in the election areas to know and uphold their democratic rights and obligations,” said Tawatchai Thongmung, Chief Administrative Officer (Palad) at Phuket City Municipality.

The parade on Tuesday coursed through the main streets of Phuket Town.

“This was to make residents aware of their right to vote and to encourage them to show up at polling booths on Saturday,” Mr Tawatchai said.