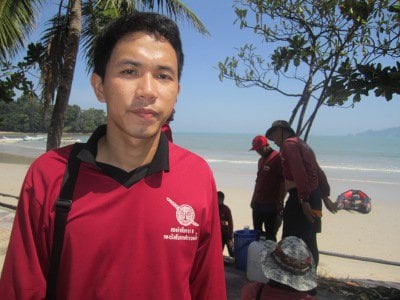 PHUKET: Phuket Marine Police have yet to officially confirm whether a human body reported washed ashore at Kalim Beach this morning is that of missing American student Joshua Shane, who disappeared while swimming in Patong on Tuesday night.

Lt Jeerayuth Onthong of the Phuket Marine Police, who headed the search mission, told the Gazette he was notified of the discovery at about 10am.

“A body was found washed ashore at Kalim Beach. We have dispatched one of our search teams to try to identify whether or not it is that of Joshua Shane,” he told the Phuket Gazette.

“The body was found by a local resident who contacted a local hotel, which in turn notified the teacher in charge of the group Mr Shane was travelling with,” he said.

Mr Shane, a 21-year-old student of Arizona State University (ASU), was among 20 students from ASU who flew to Thailand to study under an “Urban Sustainability and Planning in Thailand” project.

The native of the US state of Kansas disappeared while night swimming with three friends at Patong Beach on Tuesday night.

The search and rescue mission was called off early yesterday afternoon.

UPDATE: A medical team from the Royal Thai Navy Third Area Command based at Cape Panwa assisting in the search for Mr Shane arrived at the location where local villagers this morning reported seeing a body washed ashore at Kalim Beach – to find nothing.

What prompted the local villagers to file the report remains unclear.

Marine Police told Gazette reporters at the scene that the search for Mr Shane’s body has been called off entirely. They will now await reports from the public, the Gazette was told.