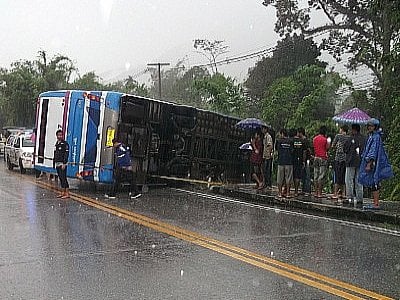 PHUKET BREAKING NEWS: A tour bus en route from Phuket to Chumphon, north of Koh Samui on the Gulf of Thailand, slammed into a bridge guardrail and flipped onto its side in heavy rain in Phang Nga province late this afternoon.

Lt Col Anan Kuaboonkaew of Takua Pa Police received a report of the accident at 5:30pm.

“Eight of the 20 passengers on board were taken to Takua Pa Hospital for treatment of minor injuries. The other 12 passengers suffered only scratches and bruises, and were treated with first aid. All are safe now,” said Col Anan.

“Fortunately, the bus did not flip into the canal below as it is three meters down,” he added.

The accident occurred soon after.

“The bus driver, Somsak Chansong, said he lost control at the curve [just before the bridge] as it was raining heavily,” Col Anan explained.