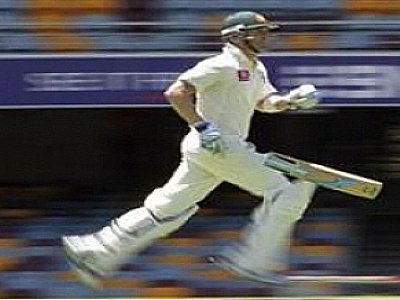 The world’s top three players all scaled dizzy heights in 2012 but Novak Djokovic ended the year staring down at his rivals after grinding down Roger Federer to win the ATP World Tour Finals title in brutal fashion at London’s O2 Arena yesterday.

The 25-year-old shed sweat and blood before dethroning Federer 7-6 7-5 in a showdown that provided a memorable climax to an incredible men’s season.

Since winning a fifth grand slam title at the Australian Open in a near six-hour epic against Rafa Nadal back in January, Djokovic’s reign has come under attack from both Federer and Britain’s Andy Murray, but after beating both in London he is clearly still the dominant force going into 2013.

World number two Federer has been all but unbeatable in the tournament since it switched to London in 2009 and was seeking a hat-trick of titles at the eye-catching Thames-side dome.

Cricket – South Africa trail
South Africa were 31 for one at lunch on the final day of the first test against Australia on Tuesday after the hosts had declared at 565-5 with a first innings lead of 115.

Australia captain Michael Clarke was unbeaten on 259 when he made the declaration, giving his bowlers more than two sessions to try and bowl the tourists out and claim a remarkable victory.

James Pattinson gave Australia hope by having opener Alviro Petersen caught behind by wicketkeeper Matthew Wade for five to leave South Africa on 6-1.

The young seamer also bowled Hashim Amla for seven but the world’s number one batsman was brought back to the crease for a no ball. Amla had reached seven alongside skipper Graeme Smith, who was 17 not out, at the break.

Clarke had sparkled again with the bat on a bright and sunny morning at the Gabba, adding 41 runs to his personal tally and taken the record for the highest individual score at the famous Brisbane ground.

The 31-year-old shared a partnership of 228 with Mike Hussey, who reached his 17th test century in 128 balls with a rushed single before being dismissed on the next delivery he faced.

It was Clarke, who had resumed on 218 with his team on 487-4 in reply to South Africa’s 450, who shone brightest with the bat, however, and he crashed a Dale Steyn delivery back over the bowler’s head to bring up his 250 with his 28th four.

His innings, from 398 deliveries in 582 minutes, eclipsed England’s Alastair Cook’s 235 scored in the opening test of the Ashes series two years ago.

Matthew Wade provided back up with 19 runs from 35 balls and looked set for more when his skipper, determined to try and force a result, declared during the drinks break.

It was a remarkable turnaround for Australia, who were reeling at 40 for three when Clarke took the crease on Sunday afternoon.

South Africa’s number one test ranking is on the line in the series, which continues with matches in Adelaide and Perth after Brisbane.

Football – John Terry
Chelsea captain John Terry will be out for weeks, not months, after he injured his knee on his comeback against Liverpool at the weekend, the Premier League club said yesterday

Terry, who had missed the previous four domestic matches for the European champions while serving a ban for racially insulting Queens Park Rangers defender Anton Ferdinand last year, was hurt in a first half collision with Luis Suarez.

Football – La Liga spat
Levante have published a heavily ironic response to a Real Madrid statement addressing reports of clashes between players and officials from the two clubs after Sunday’s La Liga match.

Spanish media reported that Real defender Pepe and Levante captain Sergio Ballesteros had been involved in a confrontation near the dressing rooms and the referee referred in his match report to a clash between an official from each club that had to be broken up by security staff.

Real won the game, which was played in atrocious conditions on a heavily waterlogged pitch, 2-1 after playing the second half without top scorer Cristiano Ronaldo.

The Portuguese was struck in the face by David Navarro’s elbow early in the match and the blow opened a gash below his left eye and caused problems with his vision.

It remains to be seen whether the Spanish soccer federation’s disciplinary committee, which typically takes action only on incidents that appear in the referee’s match report, will sanction the two clubs.

The 23-year-old Northern Irishman, who clinched his second major title with a record eight-shot victory at the PGA Championship in August, was always likely to land both honors after triumphing a season-high four times on the 2012 PGA Tour.

McIlroy followed in the footsteps of his Ryder Cup team mate Luke Donald when he became the second player to win the money list titles in both Europe and the United States.

He is also a heavy favorite to become the PGA Tour’s Player of the Year, which is voted upon by tour members and scheduled to be announced early next month.

He finished with 100 points while Woods ended up with 66, Masters champion Watson and Dufner each totaled 50, Snedeker earned 36 and Kuchar 34.

McIlroy, who secured the European Tour Race to Dubai title by finishing third at the Singapore Open on Sunday, is vying with Woods, Dufner, FedEx Cup champion Snedeker and Watson for the PGA Tour’s Player of the Year award.

Those five players were named on Monday as the final nominees for the prestigious Jack Nicklaus Award.

The nominees for Rookie of the Year were Charlie Beljan, Jonas Blixt, Bud Cauley, John Huh and Ted Potter Jr.

When all is said and done, though, McIlroy will overshadow everyone else after his stellar 2012 campaign.

The richly talented Northern Irishman has made a habit of beating the game’s best style in when given the chance and he claimed PGA Tour victories this season at the Honda Classic, PGA Championship, Deutsche Bank Championship and BMW Championship.

McIlroy clinched the Arnold Palmer Award as the PGA Tour’s leading money winner, with earnings of $8,047,952, and was delighted to follow that up with the European Tour order of merit on Sunday with two events remaining.

The 40-year-old, who admitted to the wager, was stood down from the sport immediately pending a hearing on November 20, Racing Victor

Petraeus-Broadwell Affair: Irony and tragedy before and after the revelation