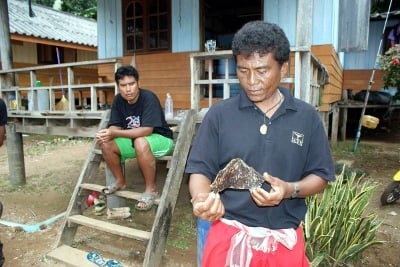 PHUKET: Officials on Koh Lanta believe a sick hawksbill sea turtle was the cause of a mass poisoning that may have contributed to the death of a 61-year-old man and resulted in 43 other villagers being admitted to hospital. (Click here to see Phuket Breaking News report.)

The villagers were admitted to Koh Lanta Hospital for suffering from sore throats, nausea and diarrhea, he added.

Local villager Boontin Changnum, 44, explained to the Gazette that he found a turtle weighing 30 kilograms caught in a fishing net just offshore.

“I brought it home and cut it up to share with 10 families in the village, but immediately after eating it my whole family had sore throats, like we had swallowed sand,” he explained.

“We all went to see the doctor at the hospital. We felt better after taking some medicine, but everyone still has a sore throat after almost a month,” Mr Boontin said.

“His symptoms were like mine, but he was also vomiting blood. We took him to Koh Lanta Hospital, but he died last Thursday,” Mr Boontin said.

“The doctor at the hospital reported that congenital diseases, including diabetes, hypertension and gastritis, might have contributed to his cause of death,” he added.

District Chief Suriyan said he had ordered staff from Koh Lanta Hospital, the District Public Health Office and the Koh Lanta District Fisheries Office to investigate the cause of the mass poisoning.

“The villagers are feeling better now and Mr Wat died from the range of congenital diseases he was suffering, not from eating the turtle,” he said.

“The villagers ate a hawksbill sea turtle, which is a protected species, but they didn’t know that,” Chief Suriyan explained.

“In this case, we believe the turtle ate toxic plankton or toxic jellyfish before it was caught in the net and then taken home and eaten by the villagers,” he added.

“We told the villagers that the turtle is a protected species,” Chief Suriyan

If anyone finds a rare sea animal, they can report it to the Koh Lanta District Office, he added.