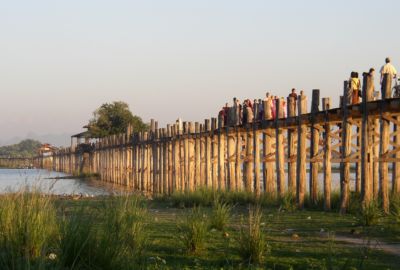 PHUKET (Reuters): The major earthquake that shook Mandalay this morning, and was felt in Bangkok but apparently not Phuket, is likely to have caused limited damage to Myanmar’s second larget city, although one person has been reported dead and several construction workers are missing.

The 6.6 magnitude quake struck around 60 km (37 miles) northwest of Mandalay, the U.S. Geological Survey said. It was shallow, at around 10 km (6 miles) deep.

“I’ve never felt such a strong tremor. I also heard some loud noises and the lights went out. No idea about the damage,” one Mandalay resident said by telephone.

Several very strong aftershocks also hit the region but there were no reports of serious damage in Mandalay.

An official at the Mandalay Meteorological Department said the epicentre was near the town of Shwebo and struck at 7:41am, which was the same time in Phuket.

Local media said a half-built bridge over the Irrawaddy River near Shwebo and Kyauk Myaung had collapsed and there may have been casualties.

A police officer in Shwebo said one woman had died and 10 people had been injured in Kyauk Myaung.

“A house collapsed in Kyauk Myaung. The Radana Thinga Bridge, still under construction, over the river was badly damaged. A huge steel beam fell into the river and five workers went missing,” he told Reuters.

A resident of Singgu, opposite Kyauk Myaung on the east side of the Irrawaddy, said some people were injured in the town and a few were killed at the river bank but this could not be confirmed with official sources.

State television, the usual mouthpiece for government statements in Myanmar, along with state-run newspapers, gave a report on the quake that did not mention casualties or damage.

Local media reported minor damage in several areas around Mandalay, including Amarapura, a town popular with tourists because of its monasteries and the longest teak bridge in the world. Pagodas had been damaged there, media said.

FIFA Futsal World Cup: Thailand face Spain in round of 16