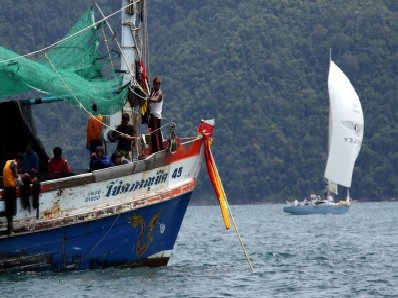 Anthony Hastings on Baby Tonga placed third in the class.

In the Firefly 850 Sports class, all eyes are now on Andrew Marshall and his Pink Lady crew, who won yesterday’s opening race, ahead of Hans Rahmann on Voodoo in second place and Roger Kingdon’s Moto Inzi in third.

Henry Kaye and Fergus Wilmer on Thor took top honors in the Multihull class race, ahead of second-place Andy Pape on Da Vinci and David Liddell on Miss Saigon in third.

The regatta combines four days of racing in and around Chalong Bay, just offshore from The Evason Phuket & Six Senses Spa, home of Six Senses Phuket Raceweek, with five nights of parties.

The racing will wrap up on Sunday, with the closing party to be held at The Evason.