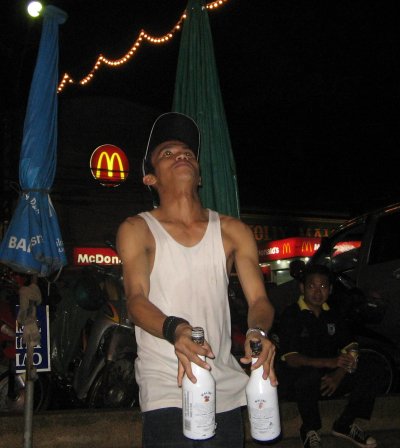 PHUKET: Bartenders will be center stage in Patong over the next 10 days as Soi Bangla hosts the “Patong Cocktail Marathon 2010″ competition that kicks off tonight.

Although the name may sound like a binge drinking competition, the real intent is to showcase the considerable skills of the legions of bartenders who work in bars and pubs all over Thailand.

A cool 1.5 million baht in prize money is up for grabs at the event, which is being promoted by the Tourism Authority of Thailand (TAT) under its current “Amazing Thailand, Amazing Value” promotion scheme.

Tonight’s activities start at 7pm with a press conference and “soft opening” that will include addresses by representatives from organizers and sponsors including the TAT, Patong Municipality, Thai Hotels Association and Phuket Tourist Association.

There will be a performance stage and a selection of 30 male and 30 female competitors for the coveted titles of ‘Mr and Miss Cocktail Marathon 2010″ as well as a “Bartender Supervisor Charity Contest,” in which proceeds will go to local tourism promotion groups.

Competitor registration will take place on Tuesday, when contestants will be advised about all the contest rules.

Events to follow will include staged entertainment by Thai musicians, a screening of a movie entitled Patong Paradise on the Beach, a presentation of competitors in the Mr & Miss Patong Cocktail Marathon and qualifying rounds in the 50,000-baht Flair Contest.

More fun will follow starting at 6pm on Saturday, July 31, when there will be qualifying rounds in the Mr & Miss Patong Cocktail Marathon, Flair Contest semifinals, musical entertainment, an ice carving competition, a cocktail shaking competition and display booths set up by sponsors. The fun is scheduled to run all the way until 2am.

Booths will be set up along Soi Bangla offering quality cocktails at rock-bottom prices.

The finals for both the Mr & Miss Patong Cocktail Marathon 2010 competition and Flair Contest will take place on stage from 5pm to 7pm on August 1.

There will also be a performance by Simon Cabaret, an award presentation and the closing ceremony.

Competing in the Flair Contest will be some of the most well-known bartenders in the region, including: