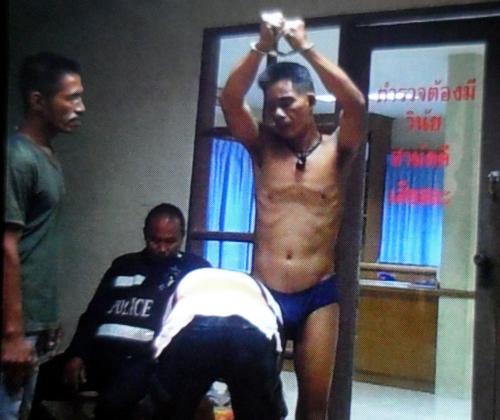 PHUKET: Officers stationed at the Pa Khlok Police Box were in for a startling surprise last night when a drunk man arrived to report his son missing, but erupted in a violent rampage after police could not immediately locate the missing son.

“He said his son was last seen on July 26. He expected us to get his son back immediately, but when he could not get what he wanted, he went crazy,” explained Maj Kittiphum Tinthalang of Thalang Police Station.

“He kept hitting the police patrol pickup truck with a piece of wood and he smashed the taillights. He also damaged a motorbike belonging to officer Sub Lt Winij Chiablaem,” he added.

“We had to call in relatives to help, and it still took more than three hours to calm him down… Even after he was handcuffed, he still cursed and spat at officers,” Maj Kittiphum said.

Officers brought Mr Sunchai into the police box to rest, and to get him out of public view as his traditional tied-up trousers had fallen off during his rampage.

“His son has returned home after relatives managed to reach him by phone,” Maj Kittiphum said.

“Regardless, Mr Sunchai will be fined for being drunk and disorderly. He will also have to pay for the damages to the police car and to Sub Lt Winij’s motorbike,” he added.

Belarus woman hospitalized in Phuket after slamming motorbike into tree