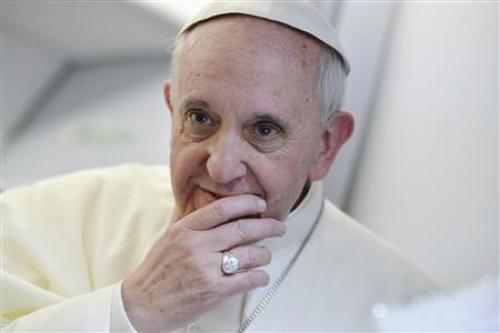 In a broad-ranging 80-minute conversation with journalists on the plane bringing him back from a week-long visit to Brazil, Francis also said the Roman Catholic Church’s ban on women priests was definitive, although he would like them to have more leadership roles in administration and pastoral activities.

He expressed pain over scandals at the Vatican bank during a remarkably forthright press conference, his first since being elected in March to replace Benedict XVI, who became the first pontiff to resign in 600 years.

Francis said there were saints in the Holy See but also “those who are not very saintly”.

The airborne encounter with journalists ranged over issues as varied as the pope’s insistence on low-key security to his desire to slip out of the shackles of the Vatican to go for walks.

The pope arrived back in Rome after a triumphant week-long tour of Brazil which climaxed with a huge gathering on Rio de Janeiro’s famed Copacabana beach for a world Catholic youth festival, which organisers estimated to have attracted more than 3 million people.

Francis defended gays from discrimination but also referred to the Catholic Church’s universal Catechism, which says that while homosexual orientation is not sinful homosexual acts are.

“If a person is gay and seeks God and has good will, who am I to judge him?” the pope said.

“The Catechism of the Catholic Church explains this very well. It says they should not be marginalized because of this (orientation) but that they must be integrated into society,” he said, speaking in Italian.

Francis was answering a question about reports of a “gay lobby” in the Vatican, after it suffered a string of scandals over paedophile priests and corruption in the administration of the Holy See.

“You see a lot written about the gay lobby. I still have not seen anyone in the Vatican with an identity card saying they are gay,” he joked.

‘No ‘ to women priests is definitive

Addressing the issue of women priests, the pope said, “The Church has spoken and says ‘no’ … that door is closed.” It was the first time he had spoken in public on the subject.

“We cannot limit the role of women in the Church to altar girls or the president of a charity, there must be more …,” he said in answer to a question.

“But with regards to the ordination of women, the Church has spoken and says ‘no’. Pope John Paul said so with a formula that was definitive. That door is closed,” he said, referring to a document by the late pontiff which said the ban was part of the infallible teaching of the Church.

The Church teaches that it cannot ordain women because Jesus willingly chose only men as his apostles. Advocates of a female priesthood say he was acting according to the customs of his times.

Many in the Church, even those who oppose a female priesthood, say women should be given leadership roles in the Church and the Vatican administration.

The long session on the plane was highly unusual in the history of the modern papacy for both its candour and breadth.

Unlike his predecessor Benedict, who knew in advance the few questions journalists would allowed to ask, 76-year-old Francis, who as an Argentine was the first non-European pope in 1,300 years, imposed no restrictions as he fielded 21 questions.

He said his week-long trip to Brazil left him very fatigued but “did me a lot of spiritual good”.

He spoke of reforms he had begun in the Vatican, which has been tarnished by a series of corruption scandals, including at the Vatican bank, which is the target of several Italian money laundering investigations.

Francis said the bank must become “honest and transparent” and that he will listen to the advice of a commission he has set up on whether it can be reformed or should be closed altogether.

“There are many people (in the Vatican) who are saints but there are those who are not very saintly … and it pains me when this happens. There is this monsignor in jail. He didn’t go to jail because he resembled a saint … these are scandals that do damage,” he said.

Francis, who in Brazil chose to ride in an open-sided popemobile or a simple Fiat, said he was not concerned about the reduced security he has chosen compared to his predecessors.

“Security lies in trusting people. It is true that there is always a danger that a crazy person might try to do something, but there is also the Lord,” he said, adding that he believed it would be even more crazy to be kept away from people.

Vatican security was greatly boosted after Pope John Paul was shot and nearly killed by Turkish gunman Mehmet Ali Agca on May 13, 1981 while he was riding in an open jeep in St. Peter’s Square.

The driver of one of the trains was still unaccounted for and thought to be inside the wreckage, at Granges-près-Marnand in the canton of Vaud, police spokesman Jean-Christophe Sauterel said.

“These are regional trains. The speeds are a little lower and even if one deeply regrets the likely loss of life of one person as well as five serious injuries, the situation could have been much more catastrophic,” Sauterel said.

He said it was too early to try to ascertain the cause of the crash.

One of the injured was taken by helicopter to Lausanne. Others were treated on the spot by paramedics or taken to hospital by ambulance.

About 40 people were on the two trains, one of which was heading to Lausanne, the other was going to Payerne.

Seventy-nine people were killed in a train crash in Spain last week, one of the worst in decades.

A ruling against the former prime minister would be his first definitive conviction and signal the end of an era in which he has dominated Italian politics for two decades through his media power and political skill.

It could also plunge the government – an uneasy coalition