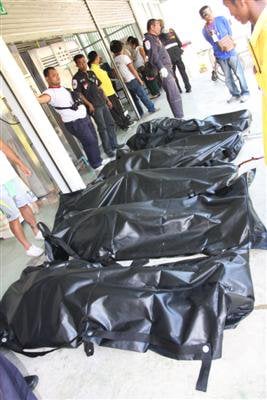 PHUKET CITY: The body of missing Japanese dive tourist Hirotsuga Yuba was recovered by divers this morning, leaving only the Thai cook of the ill-fated Choke Somboon 19 unaccounted for after the vessel sunk during a storm on Sunday night.

The bodies of four European tourists who were trapped in their cabins when the vessel capsized were recovered by divers yesterday.

The divers had to use special equipment including “rebreathers” to extract the bodies from the stricken vessel, now resting at a depth of about 70 meters some 30 kilometers off the Phuket coastline.

Phuket Governor Preecha Ruangjan and the Royal Thai Navy Region 3 Commander, Vice Admiral Narong Tesvisal, were on hand at the Phuket Deep Sea Port when a Phuket Marine Police vessel arrived at 2 pm with the bodies of Mr Yuba and the four European victims caught inside the boat.

In a scene reminiscent of the 2004 tsunami disaster, the five bodies in black rubber bags were taken by Kusolharm Foundation rescue workers to Vachira Phuket Hospital, where they will be held until claimed by relatives.

Phuket Marine Police Lt Col Wanlop Puangpaka said two teams worked to recover the bodies of those trapped inside the boat, while a third continued to search for the last unaccounted person, the vessel’s Thai cook Jumpa Somrak.

The search for Mr Jumpa would continue until he is found, either inside the vessel or at sea, he said.

Meanwhile, the husband, daughter and son of Austrian victim Gabrielle Jetzinger, whose body was spotted floating in the sea Tuesday morning, have already arrived in Phuket.

They are planning to hold a cremation ceremony at Wat Pratong tomorrow.

They plan to scatter Gabrielle’s ashes over the waters off Phuket because she loved the island so much, they told reporters.

Pattaya, not Phuket, to host ASEAN meetings in April