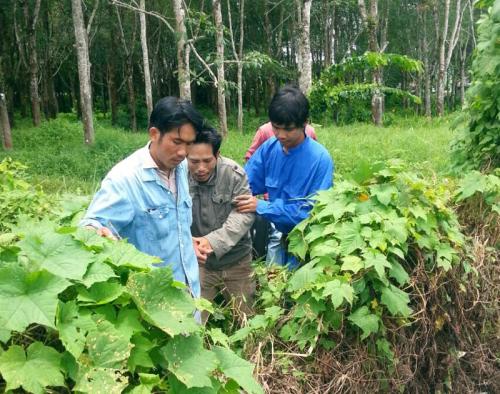 PHUKET: A severely depressed man found despondently wandering along Thepkrasattri Road carrying a knife was taken into the care of Thalang Hospital on Saturday.

“When we arrived, we saw the man in front of Muang Thalang School, walking on the median of Thepkrasattri Road and then into an adjacent rubber plantation. He was holding a knife in his right hand and a bag in his left,” a Kusoldharm Rescue worker who responded to the report told the Phuket Gazette.

“We saw three of his friends walking behind him. They were trying to calm him down and attempting to persuade him to drop the knife,” the rescue worker said. “The man kept saying ‘don’t come close’ and ‘I want to go home’.”

“We spent almost an hour asking him to put down the knife. Then he was taken to Thalang Hospital for treatment, including an injection to relieve his anxiety and depression. His friends accompanied him to the hospital,” the rescue worker said.

One of the man’s friends provided some background to the Phuket Gazette, “His name is Kittinan Lodma. He’s 34 and from Sukhothai. He arrived in Phuket on Wednesday to look for a job. He’s been staying with me in Ban Muang Mai since he arrived, but hasn’t been able to find work.

“He had been saying that he missed home and wanted to go back. But he does not have any money. In the morning he woke up, grabbed the knife and left the house. So I called my friends and we followed him,” Mr Kittinan’s friend said.

“We really do not know what to do, except continue to try and get him a job,” he added.

Mr Kittinan was released from Thalang Hospital after having been seen by a doctor, a staffer at the hospital confirmed.

Phuket gold thieves out of gas, out of luck