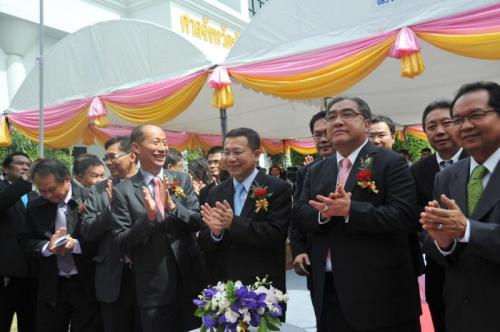 PHUKET: The Phuket Tourist Court will open late this month, while another five such courts will open across the country before year’s end, Court of Justice spokesman Sitthisak Wanachakij has announced.

The specialized court, set up to expedite cases involving foreign holiday-makers – about 20 million tourists visit Thailand every year – will encourage negotiations between parties and will video technology to hear witness testimonies from other provinces, Mr Sitthisak said.

The Phuket Tourist Court will be one of seven such courts established in major tourist destinations in the country.

The seven courts were all to initially open on September 5, but due to lack of preparedness, only the tourist court in Pattaya has been launched so far, Mr Sitthisak said.

Mr Sitthisak explained that each tourist court, formally called the “Tourist Protections Section” under the local regional Administrative Court, required a budget of only 1.5 million baht a year, in addition to personnel and facility renovation costs.

The Tourist Protections Section would be upgraded to a “division” in time for the upcoming formalization of the Asean Economic Community, Mr Sitthisak said.

The news that Phuket’s Tourist Court will open within the coming weeks follows the tourist court in Pattaya recently resolving its first case, which involved a speedboat accident that killed two Chinese tourists on August 28.

Provincial Pattaya Court Chief Judge Apichat Thepnoo said the court called in the speedboat owner and the insurance company to attend a dispute settlement procedure along with the plaintiffs, who spoke through a translator.

The deceased tourists’ families initially had asked for a total of 16mn baht in compensation.

The families accepted the compensation and said they would not sue for further compensation.

However, the criminal charges related to the case are to be heard separately from the compensation claim, and will proceed according to usual criminal trial procedure.

Tourist courts in other areas, including Phuket, might operate on different days and times depending on each area’s number of tourist-related cases, Mr Sitthisak said.

Depressed man carrying a knife coaxed off highway and into hospital