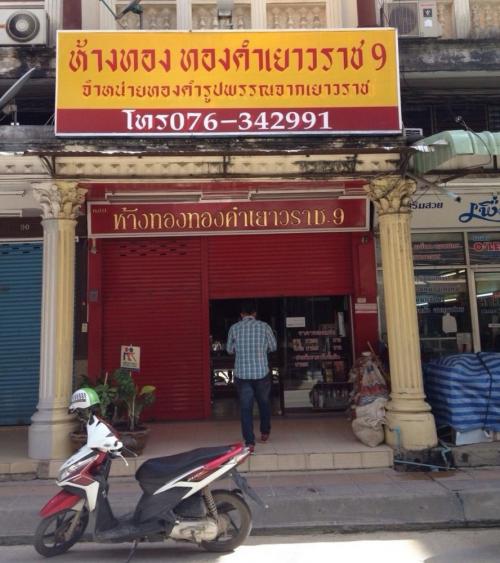 PHUKET: Thieves attempting to cut open a safe in a locked strong room at a gold store in Patong on Saturday night most likely ran out of gas for their blowtorch, forcing them to leave empty-handed, say police.

“When we closed the shop [on Saturday night], everything was still normal. I guess the thieves broke in during the night,” she told the Phuket Gazette.

The thieves had broken through the roof and cut through ceiling-mounted bars to enter the strong room, explained Patong Police Superintendent Chiraphat Pochanaphan.

“The shop has three safes kept locked in the strongroom. One of the safes has scorch marks on it showing how the thieves tried to used a blowtorch to open it,” he said.

“We found two 50kg gas tanks as well as a crowbar, screwdrivers and a kitchen knife in the room. However, it seems they ran out of gas before they could open the safe,” Col Chiraphat explained.

Police believe the thieves were well prepared to carry out the robbery.

“They cut the power supply cables at the electric meter in front of the shop to switch off the CCTV cameras before they broke in,” he explained.

Phuket Forensic Police have collected fingerprints at the scene to use in conducting their investigation.

“We will question the technician who fixed the air-conditioning unit at the shop a few days ago and the staff who recently came to install the shop’s phone system,” Col Chiraphat said.

In the meantime, Ms Nuchapha and her sister are counting their blessings.

“Fortunately, they were not able to take anything,” Ms Nuchapha said.

Ms Nuchapha did not elaborate on how much gold was in the safe, or whether or not the gold was insured.

Depressed man carrying a knife coaxed off highway and into hospital