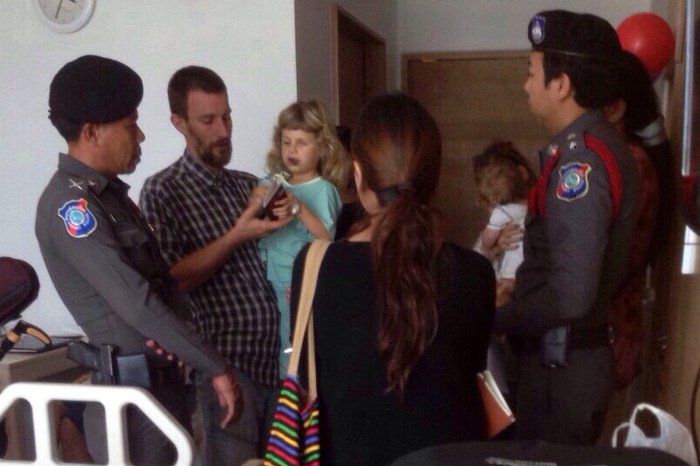 PHUKET: The Czech father who was busking on Soi Bangla for money while his 6-year-old daughter lay in hospital after being hit by a car has been reunited with his family.

The officers learned of Mr Matena’s predicament only after seeing photos of him busking on Soi Bangla on social media, explained Maj Urumporn Koondejsumrit, chief of the Phuket Tourist Police.

Mr Matena arrived in Phuket with his wife and four children on December 11, and Rebeka was hit by a car at Wat Chalong on January 6, leaving her with a broken jaw and lacerated chin, Maj Urumporn told the Phuket Gazette.

Rebeka was first admitted to Vachira Phuket Hospital, but transferred to Bangkok Hospital Phuket on January 7 for surgery.

“Mr Matena said he played guitar on Soi Bangla to raise money so he could pay for daily expenses, and in case excess medical bills were not covered by insurance,” Maj Urumporn said.

“However, the driver of the car that hit Rebeka and his insurance agent have now settled the matter. They have compensated the family and will cover all the medical bills.”

Mr Matena admitted he busked for one night only, on January 10, while his family waited at the hospital with Rebeka.

“But he stopped after learning that the insurance will cover all the medicals bills,” Maj Urumporn said.

Rebeka was discharged on Tuesday evening.

“We left our number with Mr Matena so he can contact us in case they have any further problems,” said Maj Urumporn.