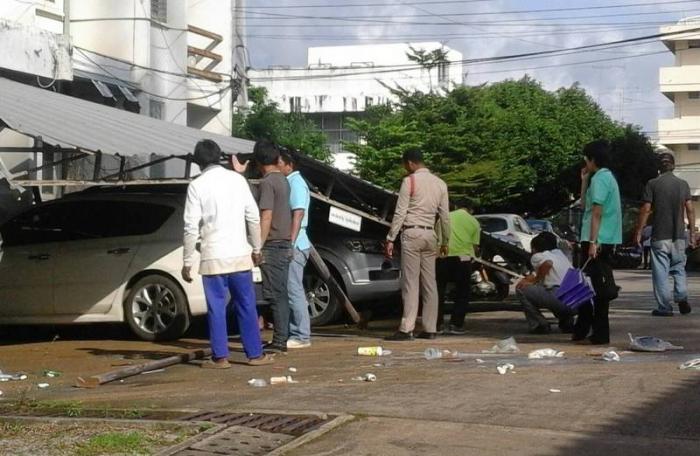 KRABI: Two vehicles were damaged when a crane crashed into a covered garage in front of a residential building at Krabi Hospital this morning.

The crane driver, Sompong Chinnawong, 60, claimed that he could not stop the crane, despite repeated attempts to brake.

“I was trying to start the engine, but it would not start. Then, for some reason, it started going backward. I think it may have been parked there for too long and the brakes were out of order,” said Mr Sompong.

The crane slammed into the garage awning, which then fell onto two cars parked underneath.

Dentist Sawarot Damdee, who owns one of the damaged vehicles and is a resident at the building, said she heard a loud noise and then the sound of people shouting. Fortunately she was still inside her room at the time.

“I was getting ready to take my child to school. I am thankful that nobody was injured in the incident,” she said.

The crane insurance company has been contacted to cover all the damages. Krabi Hospital Deputy Director Anan Pinthongpan inspected the damage and has informed the police for further investigation.