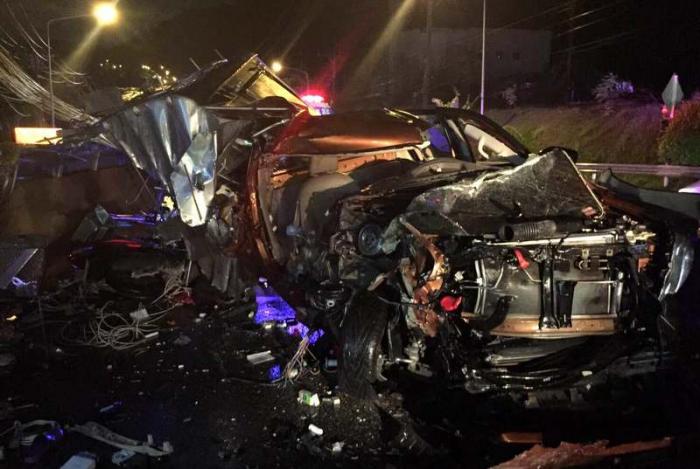 PHUKET: Yet another tour bus has crashed on Patong Hill. In the accident on Wednesday afternoon, the driver lost control and ploughed into three other vehicles, resulting in a Thai man being seriously injured and 11 others sustaining injuries.

Witnesses told Patong Police that the bus crossed over into oncoming traffic while in a downhill turn, crashing into a pick-up truck, a car and a motorbike before ramming into a tree on the roadside.

The bus, with a MKR Transport and Jinchi Travel Group logos on it, had 22 Chinese tourists on board at the time.

“The crash took place in front of the Wyndham Sea Pearl Resort on the hill,” said Lt Col Weerapong Rakito.

“There was a Nissan Navara pick-up truck in the middle of the road with serious damage to its front. A Honda motorbike and another vehicle were also damaged when they rear-ended the pick-up truck,” he added.

The truck driver, named as Supachai Jaiyen, sustained serious head and chest injuries and is being monitored by doctors at Patong Hospital.

The motorbike and car drivers, five bus passengers, two passengers in the truck, the bus driver and another employee of the bus service also received minor injuries.

Police were unable to question Mr Supachai as his condition is critical, but said they would file charges of reckless driving resulting in injury and property damage against the bus driver.

More than 30 Chinese tourists were injured when their tour bus crashed into a temple at the bottom of Patong Hill in August (story here), and another bus loaded with Chinese tourists broke through a roadside barrier and veered off the road on that hill in June (story here).