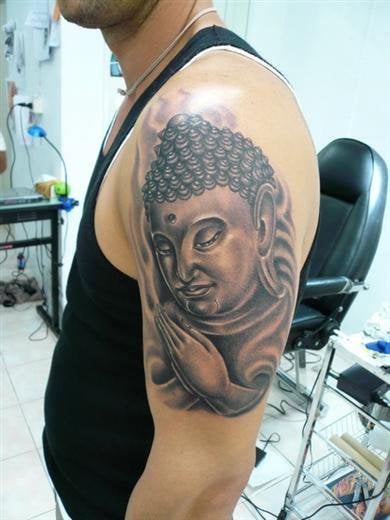 PHUKET: The Culture Ministry has attacked the growing trend for tourists in Phuket and other parts of Thailand to have religious images tattooed on their bodies.

It has ordered provincial governors across the country, including Phuket, to crack down on such tattoos, igniting a debate on the human rights implications of forbidding the practice.

Culture Minister Niphit Intharasombat told reporters on Monday that Phuket’s Culture Office had uncovered an “alarming trend”: tourists have images such as those of the Buddha, Ganesh and Jesus Christ tattooed on their arms, legs and ankles.

It is culturally inappropriate and erodes respect for religion, Mr Niphit said.

But the ministry is likely to face an uphill battle to end the practice. The service is highly popular and tattooists can charge extra for such work, with some jobs costing upwards of 20,000 baht.

Mr Niphit downplayed the likelihood that the tattoos could be a genuine expression of spiritual belief.

The tattoos were just part of a fashion trend among tourists, who most likely did not believe in the religion and were ignorant of the true significance of the image.

As a result, Mr Niphit said the ministry’s Subcommittee on Safe and Creative Media had decided to order the governors of all Thai provinces to ban foreigners from getting tattoos of religious images of any faith.

Governors would be asked to convene meetings of those involved in the industry to ask for their cooperation, he said.

“At the meeting, we noted that these tattoos were all over the country, in particular in tourist destinations such as Khao San Road, Tawanna and Chatuchak Market in Bangkok, Chiang Mai and Phuket,” he said.

“We have to help prevent images that are respected in various religions from being tattooed onto the body.”

People with visible religious tattoos who engaged in “bad behavior” such as “sitting drinking alcohol and arguing” would damage the faiths through association, Mr Niphit said.

Acknowledging that Thai law did not prevent people from getting such tattoos, he said the ministry needed to coordinate with relevant agencies to draft measures to prevent the practice.

He would also propose to the National Culture Committee that a law be drafted that forbade the use of religious symbols for commercial purposes. The law, if passed, would affect both those who offered and used such services.

Ladda Tangsupachai, director of the ministry’s Cultural Surveillance Center, warned that if “people who showed their bodies for a living”, such as “prostitutes” and “go-go dancers”, had such tattoos, it would erode respect for religion.

But Human Rights Commissioner Wasan Panich pointed out that while Thai law prevented people from violating the Thai flag and other national icons, there were no such laws concerning religious symbols.

Any law banning the use of such images for commercial purposes must not violate people’s rights, because the term “commercial” has a broad meaning, he said.

“If people have Buddha images tattooed on their body, on their arms or chest, for example, you can’t forbid that because it’s not insulting,” he said.

“Anyone can get these tattoos because it’s their right to do that to their own body.”

But, he added, if people had such images tattooed to their ankles or “inappropriate organs”, it could be seen as insulting to religion.

“For example, if a foreigner got a tattoo of the Buddha on his ankle, Buddhists would see that as insulting to their religion,” he said.

“But if a foreigner gets a cross on his ankle, Buddhists probably wouldn’t think anything of it, but other foreigners might not be satisfied.”

“Because of that, the basic principle is that you must respect the rights of the individual, but you must not violate the rights or beliefs of others,” he added.