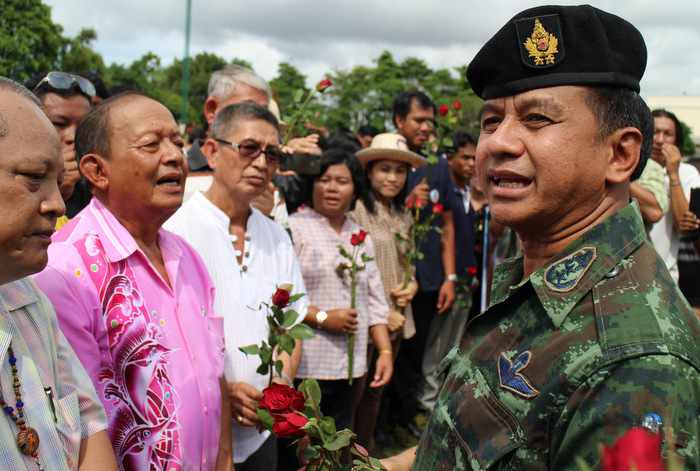 PHUKET: The island’s representatives of the National Council for Peace and Order (NCPO) are inviting residents and tourists to file anonymous complaints of suspected corruption, as well as suggestions for coup leaders on how to improve the country.

Any complaints filed as highly confidential will be treated as such, the island’s leading authorities have assured.

“You can report any trouble you have, especially when it involves corrupt officials abusing their positions of power,” said Apidet Kongkhayan of the National Anti-Corruption Commission (NACC) Phuket office.

“To file a complaint, come to our office in person. You can choose whether or not to tell us your name,” he said. “Alternatively, you can send a complaint by anonymous letter or call us at 076-680054-5.”

Other ways of filing a complaint include by fax to 076-210405, by email to area55_nac@nacc.go.th, or via the Phuket NACC’s Facebook page (click here).

The NACC Phuket office is located on the second floor of the Provincial Hall complex’s new building.

Mr Apidet suggested that foreigners have a native Thai speaker on hand to translate the complaint into a clear, concise report.

“The NACC Phuket office actually opened in March last year, but not all provinces have NACC offices,” said Mr Apidet. “Another 44 branches have yet to open.”

Meanwhile, Maj Gen Peerapol Wiriyakul, the top-ranking soldier in Phuket, is inviting suggestions about how to improve any aspects of living on the island.

“Anyone who feels the need to share their thoughts or to file a complaint about anything that is causing trouble in their lives, please feel free to let us know,” he told the Phuket Gazette.

“If you have a complaint that is to remain highly confidential, you can file it directly to the Royal Thai Army Conscription Unit located at Provincial Hall,” said Gen Peerapol.

“Ask for Col Suradet Watcharachoti, and rest assured that he will report the complaint to me.”

People who feel uncomfortable filing complaints about corruption or other troublesome issues with local authorities are urged to call a national hotline by dialing 1111.

The NCPO ordered the hotline to be established as a way of stopping local power mongers from preventing complaints being filed, explained Sompas Nilpan, public service director for the permanent secretary at the Prime Minister’s Office.

“The NCPO wanted to open channels of communication for people to report issues, concerns or any hardships, through four alternatives means,” he explained (story here).

“This would allow the public to share their ideas with the NCPO; all complaints will be noted and people can follow up on the progress of action,” Mr Sompas said.

Following the coup on May 22, Gen Prayuth ordered each of the four Army areas in the country to set up reconciliation centers where people could exchange political views and obtain direct information about the junta.

As of May 28, the closest center to Phuket was the Royal Thai Army base in Nakhon Sri Thammarat (story here).

However, Col Peerapol confirmed to the Gazette this week that the island now had a reconciliation center of its own.

“Governor Maitri Inthusut is the head of the center, which was established to conduct activities that will help restore ‘harmony’ to Thailand,” he said.

“It is that simple. The center will co-ordinate activities or whatever it takes to achieve this aim. Precisely what, however, depends on officers at the center.”