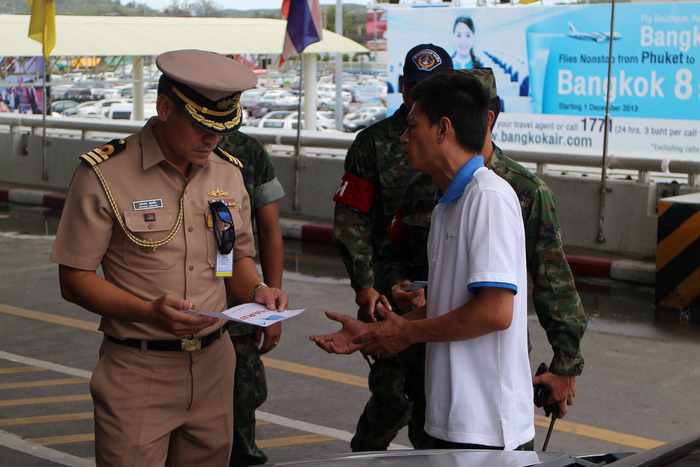 PHUKET: Owners of the stores operating inside Phuket International Airport have until Thursday to present official proof from the Airports of Thailand (AoT) that they have permission to operate, or see their shops shut down, a Navy captain has warned.

“Any airport shops open past the deadline without the appropriate papers posted at the store, or found selling products not listed on the permit, will be ordered to close immediately,” said Capt Somphong Narkthong of the Royal Thai Navy Third Area Command, based in Phuket, who led the airport sweep this morning (story here).

The military has set a July 31 deadline for all illegal operators, including taxis, to be cleared out of Phuket’s critical tourism portal, Capt Somphong explained.

“The army will be patrolling the airport 24 hours a day, seven days a week, from now until the end of the month in order to stamp out illegal operations,” he said.

“One place they will patrol is outside the airport terminal building to look for any illegal taxis. If they find one, an Army officer stationed at the exit will be notified and will stop and question the driver before the taxi will be allowed to leave the premises.

“We also have information about a taxi mafia operating here. We are collecting more evidence in the hope of making an arrest soon.”

Capt Somphong declined to name any suspects or reveal the number of taxis allegedly involved in the mafia.

“Army officers will need cooperation from taxi passengers in order to have success and increase safety of customers at the airport. We hope that they can understand our situation,” he added.

“We found two illegal black-plate taxi drivers transferring customers from Patong and Karon to the airport, one taxi service counter selling SIM cards and top-ups to foreigners, and three shops inside the airport that had expired contracts,” said Capt Somphong.

“These three shops have to move out by Thursday; the taxi service counter operators have been warned; and the taxi drivers have been blacklisted.”

Hotel investment in Thailand likely to decline on AEC opening