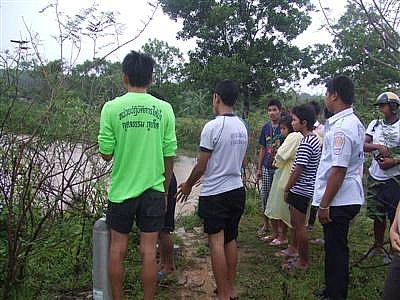 PHUKET: A construction worker trying to catch fish drowned in a fast-moving klong in Phuket’s Thalang District this afternoon.

Police were notified of the drowning by the victim’s friend, Soonthorn Nopsawan.

The two men set out with a net to trap fish in the swollen waters of Klong Banya in Thepkrasattri Village 4.

Mr Soonthorn stayed on the near bank of the klong while Mr Sawai, with the other end of the net tied around his waist, tried to make the five or six meters to the other side by walking and swimming.

He was caught up in the current of the klong and went under, his friend powerless to help him.

After arriving, it took divers from the Kusoldharm Foundation about 30 minutes to locate and recover the body of Mr Sawai from the turbid waters of the normally slow moving waterway.

Mr Soonthorn told rescue workers that Mr Sawai had arrived in Phuket only three weeks earlier to work on a construction site, where he was staying in the workers’ camp.

The deceased thought that having the netting tied around his waist would provide him safety, but in fact the extra weight pulled him under the surface and caused him to drown, he said.

Kusoldharm Foundation workers transported the body to Thalang Hospital, where it will be held until claimed by relatives.

Thailand Floods: A Phuket view of the damage in a nutshell