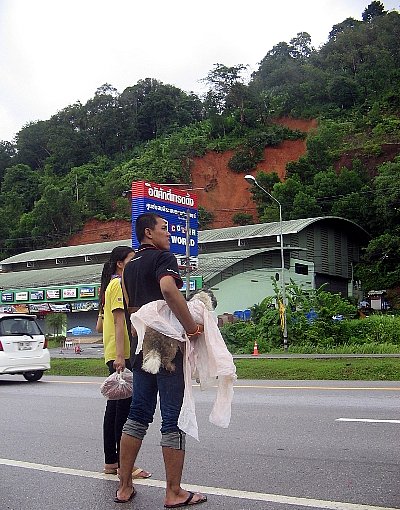 PHUKET: Phuket officials are urging more residents to evacuate as torrential rain continues to fall on exposed soil at a landslide risk zone along the bypass road northbound in Rassada.

Rassada Mayor Suratin Lianudom, who has been at the scene all day, told the Phuket Gazette this afternoon that officials are closely monitoring several stretches of the road.

This morning a small landslide near the “bypass waterfall” opposite the Hino dealership caused concern. Downslope in the same area, a section of the concrete embankment that channels water to a drainage ditch running down the median strip collapsed, exposing more soil to the elements.

Environmental engineer Brad Kenny, a water expert who runs the Environmental Solutions (ESP) firm in a shophouse in a risk area further south, told the Gazette that removal of untold thousands of cubic meters by a construction equipment rental firm over the past decade had compromised slope stability in the area diagonally behind his workshop.

Several years ago he complained about the removal to police, but when officers arrived to investigate nothing happened.

The operator must have made millions selling excavated soil at 900 baht per truckload over a period of eight years before the operation ceased about a year and a half ago, he said.

The land was owned by another party, who was probably pleased with the ongoing excavation as it expanded his usable property area, he said.

The site of the excavation is clearly visible on Google Earth.

Mr Kenny, who has been decorated by the Royal Thai Navy for his many years of volunteer work, escorted the Gazette on a tour to the back of the nearby Penang Furniture warehouse where another unreported slide took out a section of wall and ceiling.

Sources at the scene said that when more torrential rain hit at about 3:30 this afternoon, officials were saying that a major slide “could happen at any second”.

Residents in the staff quarters of the Adisak Equipment company and nearby businesses deemed to be at greatest risk continue to wait under tents in an evacuation area across the road, set up by Rassada Municipality.

It could be a wet evening for them. The 24-hour forecast for Phuket issued by the Thai Meteorological Department at 5pm today calls for “fairly widespread thundershowers covering 80% of the province, and isolated heavy rain”.