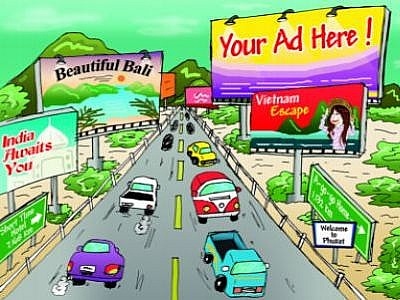 PHUKET: The Phuket Gazette fully supports the long-overdue effort by the Phuket Highways Office to remove billboards and other unsightly advertising signage from roadsides under its authority, and we would encourage the local Department of Rural Roads and other agencies with similar authority to follow suit as soon as possible.

If there is another “tropical island paradise” with roadsides that have been so severely tarnished, we wouldn’t want to visit it. Unfortunately, the problem has grown to such a scale that it will take considerable government commitment, but very little budget, to solve it.

The issue has been a constant source of complaints sent to the Gazette over the years, as well as the subject of some futile editorializing in this space. The authorities have not only ignored the problem, but have actually made it worse by being among its most active participants.

Tambon administration and municipal officials, the Phuket provincial office, police, and even religious proselytizers are among the many contributing parties. How else does one explain how ‘Daeng’s Fishballs’ can erect a sign along a major thoroughfare advising motorists that her delicacies lie just 2.8km down the road?

And how is it that Khun Daeng’s sign and hundreds of others like it are allowed to parade as government navigational aids such as those for the airport, hospitals, police stations and Phuket Provincial Hall?

Let’s hope for the sake of what is left of the island’s once-beautiful landscape that government offices themselves wake up and start applying their resources to more effective and environmentally friendly ways of disseminating information. Why not post it on their own websites, or simply alert the media through professional press releases by email (not by fax, as most still do even today).

It seems that no roadside on the island has been spared the blight. Even the lovely, tree-lined and once dignified Damrong Road that runs along the base of Toh Sae Hill and most of the government offices has recently been targeted.

Those exiting one of the doors of the century-old Phuket Provincial Hall are immediately struck with visual cacophony in the form of multiple placards touting the offerings of a property developer, a pre-roasted chicken retailer, and much more.

It is unclear why Phuket City Municipality, which presumably has jurisdiction over this particular stretch of road, allows such eyesores to flourish there.

The sign spectacle is hardly limited to roadsides. The median strip along the road from Tesco Lotus to Kathu village now features scrolling messages that are a safety hazard to motorists, while the number of ear-splitting sound trucks plying many of the island’s roads probably exceeds the number of public transport vehicles in Phuket.

Let’s hope that more of the island’s authorities with control over the roads might now take steps toward tempering the blight against property that theoretically belongs to all of us. Meanwhile, we must thank the Phuket Highways Office for its moves in the right direction.