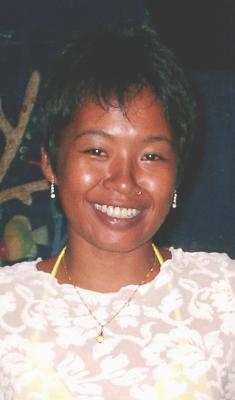 KAMALA: Police and workmates say they are concerned for the safety of a divemaster who vanished after a party at a bar in Kamala last Saturday (November 29). Phikun “Nori” Srisaksungnoen, 25, from Kamala, had been celebrating with colleagues after returning from diving off Phi Phi. She was last seen at 10 pm, leaving behind her car and her two children. The children are now being cared for by their father, from whom K. Phikun is separated, but who lives not far away. K. Nori began working with Merlin Divers six months ago. Marcus Etter of Merlin Divers told the Gazette, “If she had any problem she would have told us. Instead, she just disappeared. We are worried about her.” He added, “If anyone does see her, I hope they will tell her that her children, her parents and her colleagues all miss her and worry about her. We hope that she will get in touch soon.” Anyone who has seen K. Nori is asked to notify their local police station or contact Mr Etter on 076-385518 or 06-6829861, email infor@merlin-divers.com