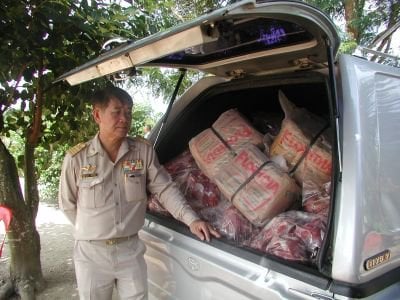 KOH KEAW: Veterinarian Jirayu Niranvirot of the Phuket Provincial Livestock Office [PPLO] – working on a tip-off – today discovered two tons of smuggled buffalo meat in a pick-up truck outside a house in the Baan Na Nai area of Koh Keaw. Illegally-imported Australian cheese was also found. Sunart Wongchawalit, Chief of the PPLO, told the Gazette that the market value of the contraband meat was about 240,000 baht. “It seems that two men brought the meat in from Malaysia. They showed an expired importer’s license that applied to a different shipment of meat imported on a different day,” said K Sunart. “That way they avoided paying 200,000 baht in import duty,” he added. Dr Jirayu said that when when PPLO officers began questioning them, the driver and his passenger ran away, attempting to take some of the paperwork and other evidence with them. The PPLO officers questioned Kasem Tothip – the owner of the house where the meat was found – who at first denied any wrongdoing. “I have no idea why the two men ran away. Maybe they were just scared of the officials,” he said. K. Kasem later confessed, however, to ordering the meat from Sungai Golok in Malaysia, close to the Thai border. K. Sunart said that the meat had been sent to an animal disease prevention center in Nakhon Sri Thammarat to check for diseases such as anthrax.

Day of protests in King’s Cup