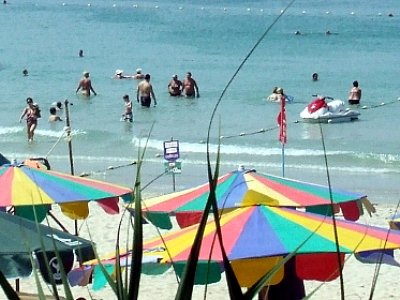 PHUKET: A second swim area has been cordoned off at Kata Beach in Phuket, but lifeguards continue to worry about the safety of swimmers and snorkelers who venture outside the float ropes and into the path of speedboats and jet-skis.

Safety issues at the popular west coast beach were highlighted earlier this month when Russian tourist Nikolai Nefedov, was hit by a parasail boat. He survived the incident by attempting to dive down below the boat. Despite Mr Nefedov’s efforts, his leg was still badly mangled by the propeller of the boat, the operator of which was never sought by the police.

Yesterday, a foreign tourist posting on the Phuket forum of the popular ThaiVisa.com website had a similar story:

“I’m a British tourist. Yesterday I was swimming at Kata Beach when I was nearly run over by one of the powerboats. I think it was the parasail one. When I shouted at the driver he then maneuvered his boat between me and the shore and proceeded to try and whip me with a coil of rope!”

“I attempted to report the incident to the police but they seemed uninterested. They even sniggered. They told me that if I wanted to make something of it I would have to travel to the police station in Chalong to file a report,” he wrote.

To see what improvements have been made to the beach since the start of the high season, the Gazette contacted Wijit Dasantad, a community liaison officer at the Club Med Resort. He confirmed that the resort deployed a floating cordon off the beach a few days ago.

“Club Med’s roped off area is 200 meters wide and extends 100 meters from the beach. We set it out every high season and it stays till around April. It cost about 50,000 baht, including installation,” he said.

The addition of the Club Med swimming zone is the second at Kata Beach. Another was set up in front of the Kata Beach Resort earlier in the season.

Mr Wijit said most parasail boats and Thai jet-ski operators stay 100 to 200 meters offshore, where swimmers are few. However tourists who rent jet-skis often come too close to the shoreline, endangering swimmers, he said.

A tour operator at Laem Sai told the Gazette that Mr Nefedov was snorkeling about 50 meters offshore when he was hit by the parasail speedboat.

Uten Singsom, head of the Kata-Karon Lifeguard Club, told the Gazette the increase in activity at the beach from December through February makes accidents inevitable if clearly delineated zones for swimmers and marine vessel operators are not established.

To further increase safety, the Kata-Karon Lifeguard Club has asked the Phuket Provincial Administration Organization to request the Karon municipality to set up a system of red and yellow flags, which lifeguards would use to indicate to tourists where it is safe to enter the water, he said.

“Until such a system is in place, accidents can happen at any time,” he said.

While Kata Bay is generally free of riptides during the high season, increased activity poses its own set of risks, including tourists who go in the water while drunk or who suffer from medical conditions that put them at risk, said Mr Uten.

He offered the example of a Russian tourist who drowned in waist-deep water last month as a case in point.

The Kata-Karon Lifeguard club currently has six guards stationed at Kata Beach and three at Kata Noi, he said.

There are also 16 lifeguards along Karon Beach, which currently has two safe swimming zones: one in front of the Hilton Arcadia Phuket Resort & Spa and the other off the stretch of beach at Karon Circle.