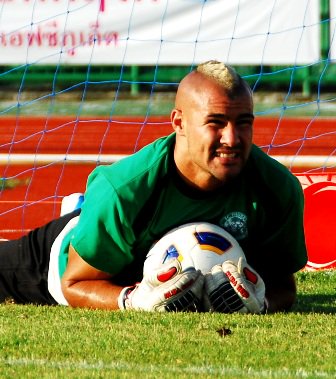 PHUKET: FC Phuket manager Narubas “Ko Lek” Aryupong revealed today that he will withdraw from running the team next season due to the current financial crisis.

“A lot of money is needed to run a football team in Division 1. Yearly expenses reach over 40 million baht and I cannot afford that anymore. I will run a team in Division 2 instead as it uses less money,” Narubas said.

FC Phuket still have a chance to survive if a new sponsor is forthcoming, following the cancellation of Phuket Provincial Administration Office (OrBorJor) support for next season.

“If the team wants to survive, the option is there for someone to take over and change the team name. I am now in discussions with new sponsors and the Football Association of Thailand to solve the immediate problems. Everything should be clear by December 29,” he explained.

With this crisis, the club will not extend the contracts of their three foreign players – Jonathan Matijas, Nenebi Tre Sylvestre and Kone Adama.

The contracts of Matijas and Adama will end on December 31 while Nenebi’s will end on January 31.

As such, last Sunday’s match with Air Force United FC was the last chance for both Matijas and Adama to play for FC Phuket, but fans will now not see them in an FC Phuket shirt for the remaining two matches scheduled in January.

Matijas said “I am very happy to have played with Phuket. I would like to stay here, so if the club can sort out all the problems and they want me to stay, I will stay.”

Nenebi said “I would like to stay here. If Ko Lek runs a new team in Division 2, I will play, even if that means I have to play for less money.”

FC Phuket players under loan contract will have to return to their original teams, Ko Lek said.

“We borrowed most of the players from Muangthong United and Ratchapracha FC. If there is nobody to run the team next season, they will have to go back to the club they are from. I will ask only a few to play for me in Division 2.”