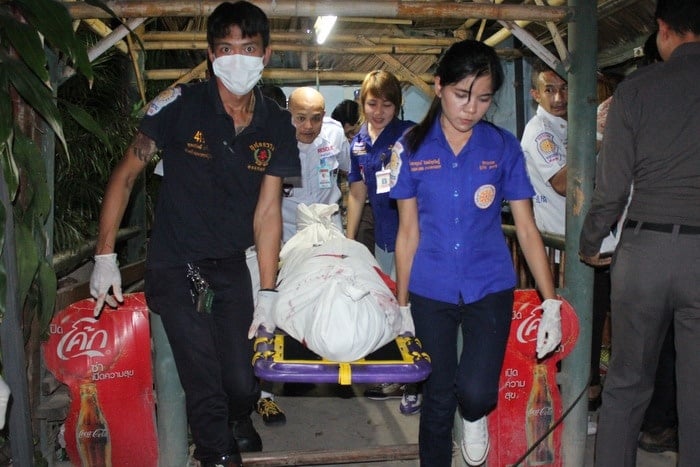 PHUKET: A civil defence volunteer has confessed to the shooting murder of his girlfriend inside a somtam shop in Phuket last night.

Police were called to the scene on Wichit Songkram Road in Thung Thong at about 8:45pm, where they found the body of 46-year-old Yupin Somrak on the floor of the shop’s kitchen.

A handwritten note was left behind by the boyfriend, Phumsak Sriput, said Col Peerayuth, which read, “I gave the house and shop to a drug addict who cheated me until I had nothing left.”

“Witnesses at the scene told police that Mr Phumsak, a civil defence volunteer for the area, sat on the sidewalk for a while after the shooting,” explained Col Peerayuth.

“However, Mr Phumsak fled on his motorcycle just before police arrived. After being shown by witnesses which way he fled, a group of officers pursued Mr Phumsak and were able to detain him in front of the Baan Ketho police box about 300 meters from the shop.”

Mr Phumsak was found with the gun used in the crime and confessed to the murder, said Col Peerayuth.

“We charged him with murder, and will continue our investigation to find out the motive,” he said.

“The only other information we were able to gather from him is that the couple had recently had several arguments resulting from jealousy.”

Mr Phumsak is being held at Thung Thong Police Station. Ms Yupin’s body has been transferred to Vachira Phuket Hospital to confirm the cause of death and to await collection by relatives.