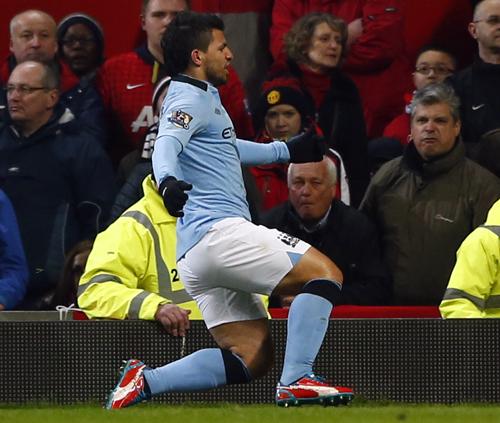 PHUKET: Sergio Aguero tore through the Manchester United defence to score a dazzling winner as Manchester City beat the Premier League leaders 2-1 yesterday evening to remind them they are still champions for a few more weeks.

Second-placed City’s second successive league win at Old Trafford, following last term’s 6-1 demolition job, allowed them to narrow the gap on their neighbours to 12 points with seven games remaining even if their title hopes are all but over.

A blistering opening 10 minutes gave way to a scrappy first half before the visitors broke the deadlock in the 51st minute with James Milner’s deflected goal.

The lead lasted seven minutes before an unfortunate own goal from City captain Vincent Kompany following a superb free kick by Robin van Persie but substitute Aguero came on to snatch the points with a special goal in the 78th minute.

United lead the way with 77 points from 31 games with City on 65. Third-placed Chelsea are on 58 points, level with fourth-placed Tottenham Hotspur who have played a game more.

On a chilly evening at Old Trafford, visiting fans taunted their hosts with songs celebrating the fact they were still champions although City manager Roberto Mancini has already conceded the title.

The frenetic start to the game highlighted there was more than just three points at stake as United sought to eradicate memories of last season’s 6-1 thrashing in this fixture and City reproduced fleeting glimpses of last term’s attacking spark.

The visitors had the better chances as Samir Nasri, Milner and David Silva wasted decent opportunities while United forward Van Persie, enduring a barren spell of 10 games without a goal, experienced yet more frustration.

The Dutchman’s early shot across goal went just wide of the far post and he later fired wildly into the crowd from distance.

United’s stand-in centre back Phil Jones was quick off the mark to intercept after good work from Silva who tried to set up former Old Trafford favourite Carlos Tevez.

City finally reaped a reward for their domination of possession when Ryan Giggs messed up an attempted backheel to allow Gareth Barry to run free down the left and lay the ball to Nasri who set up Milner for a shot that went in off Jones.

The goal brought to an end a six-match run of clean sheets in the league for United but City celebrations were shortlived as the leaders quickly pulled level.

Jones’s header from an inswinging Van Persie free kick, which had already beaten keeper Joe Hart, hit Kompany on the back before flying into the net for an own goal.

Both teams chased a winner with Danny Welbeck heading straight at Hart and Ashley Young also on target but it was the introduction of Aguero in place of Nasri with less than 20 minutes to go that proved decisive.

The Argentine, who started on the bench as he was not fully fit, picked the ball up on the edge of the box and drifted past several defenders before firing high into the net.

United manager Alex Ferguson wrote in his programme notes: “How do we analyse this season – is it one of regret or celebration? For me it’s something of the proverbial curate’s egg, part bad but with some great redeeming features.”

He would agree yesterday’s result was not one of them.