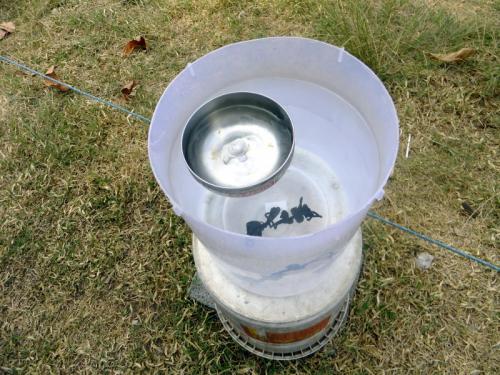 PHUKET: One of the biggest events Phuket will see this year – if you are the owner of a singing bird, that is – will take place in Thalang tomorrow.

As many as 720 singing red-whiskered Bulbuls, Nok Pa Rod Jook in Thai, are expected to take part, coming from all over Thailand to do so.

The winner of this particular contest, a nap dork contest, will be the bird who sings the most in a specified time. The owner of that bird will be richly rewarded with 10,000 baht and a trophy from the Ministry of Agriculture and Cooperatives.

The contest is organized in two rounds, in time periods 18 seconds long – 18 seconds because time is kept not with a stopwatch but by dropping a bowl into a clear container of water. The bowl, which has a hole in it, takes 18 seconds to sink to the bottom.

In round one, birds have four chances to sing, each chance 18 seconds long. By the end of the fourth chance, they must have sung at least eight times. If not, they’re out.

Referees will be not only listening carefully, but watching with keen eyes, because if the bird flaps its feathers while warbling, that warble does not count.

In the second round, birds have only one chance to sing. The bird who sings the most is the winner.

Participants may not wear dark glasses or hats, as these are thought to scare the birds.

Bird contests go on regularly in Phuket during the dry season – one is held two times a week just across Thepkrasattri Road from the Phuket Gazette offices (map here).

“Sometimes we take the bird out for a ride to help it relax,” said Saeree Mueanprakarn, who had brought several birds to the small contest there last week.

“The birds are not free, so we have to help them relax,” Mr Saree said.

This includes mixing a little tranquilizer with their water, he added.

“The birds love to stay in a clean place, so at night we throw out all their food, then we cover the cage with fabric and put it in a quiet place,” he added.

“The ideal food is kluai khai, because it is harder than the average banana and won’t make the cage dirty, but it is expensive, so I usually feed the birds other things, like apples, orange, and luffa gourds,” he said.

Some birds are caught in the forest; those that are bought cost anywhere from 1,000 to one million baht. Cages are equally expensive, running from 250 baht to one million baht as well, depending on the wood, according to Mr Saree.

Birds can be mixed but must be at least 95 per cent red-whiskered Bulbul.

As for how the birds learn to sing – other birds teach them, Mr Saree said.

The contest tomorrow will start at 11am, at the Department of Agriculture Phuket office, across from Muang Thalang School on Thekrasattri Road, Thalang (click for map here).

Please be aware the contest may be called off if it rains.