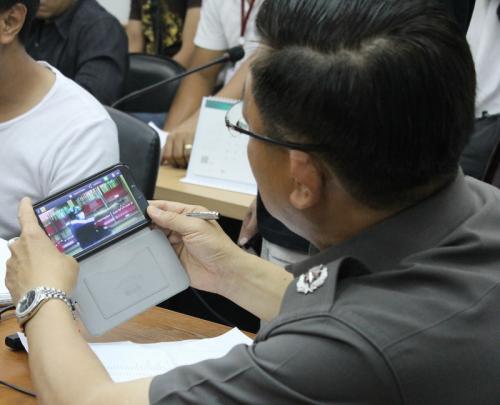 PHUKET: Police are offering a reward of 200,000 baht for information leading to the arrest of the man who robbed the C.P. Gold Master & Jewelry store at gunpoint yesterday evening, shooting dead a customer at the store in the process.

Apichet Choo-kliang, 32, was shot in the chest trying to stop the gold heist (story here).

Mr Apichet was pronounced dead shortly after his arrival at the nearby Phuket International Hospital.

The robber made off with gold jewelry valued at more than 2.32 million baht.

Police suspect the man who committed last night’s heist was the same one who robbed the Kasikornbank Tesco Lotus Chaofa branch in Wichit on January 7 (story here).

“The CCTV camera footage [from the gold heist] shows the robber walked with a limp, just like the gunman wanted for robbing the Kasikornbank Tesco Lotus Chaofa branch,” Phuket Provincial Police Commander Choti Chavalviwat told the Phuket Gazette this morning.

“We suspect it is the same man. We are checking every CCTV image from the Kasikornbank robbery at the Tesco Lotus Chaofa branch and comparing them with CCTV images of the gold shop robber from last night,” he added.

Maj Gen Choti described the robber as “quite plump”. “He was wearing a dark t-shirt, black jeans and black shoes. From the CCTV image, it looked like he was carrying a .38 pistol,” he said.

Police collected fingerprints at the scene.

“The robber was not wearing gloves when he removed the gold jewelry from the display cases, so we collected his fingerprints and we will send them to the Forensic Science Region 8 office in Surat Thani to examine today,” Gen Choti confirmed.

“We expected the results will be available in about two days,” he said.

Mr Apichet, originally from Thung Yai District in Nakhon Sri Thammarat, worked as a bartender at the Novotel Phuket Resort in Patong.

He was to marry his long-term girlfriend early next year, Gen Choti said.

“We have spoken with his fiancée. Mr Apichet was a generous man, always helping other people. He had also served in the military,” he added.

The hunt for the killer gunman continues.

“We have notified every police station in Phuket and nearby provinces of the robbery,” Gen Choti said.

Bullets removed from Mr Apichet’s body will also be sent for forensic examination, the general added.

Anyone with information that may lead to the robber’s arrest is urged to contact the nearest police station or call the Phuket Provincial Police at 076-212 046.