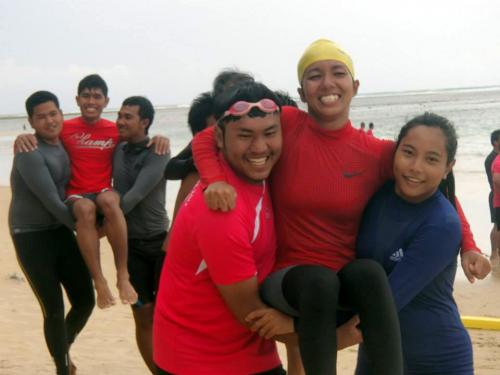 PHUKET: Scores of everyday people are voluntarily undergoing lifeguard training in order to help Phuket’s strained contingent of lifeguards cope with the growing number of tourists, expats and local residents who need to be saved from dangerous surf.

There are currently 38 beach guard stations at 13 beaches in Phuket, staffed by a total of 108 lifeguards, explained Phuket Lifeguard Club President Prathaiyuth Chuayuan.

“From January through July this year, we saved 641 people, comprising 577 foreigners and 64 Thais,” Mr Prathaiyuth told the Phuket Gazette.

“This year is the fourth year we have held lifeguard training for the public. The 70 people being trained this year are ordinary people – beach hotel staffers, beach vendors and swimming club members – who might have the chance to rescue people at the beach,” he said.

The training, organized by the Phuket Provincial Administration Organization, began on Monday and will conclude tomorrow.

Among those conducting the training are personnel from the Third Naval Area Command and the Phuket Marine Police.

Joining them are members of the Surf Life Saving Australia Club led by David Field, who has been conducting surf life-saving training workshops in Phuket for more than a decade.

During the week-long workshop, participants will learn many basic skills in how to rescue drowning victims: emergency care, resuscitation and first-aid techniques. They will also learn a variety of surf rescue techniques: board rescue, tube rescue and rescue with no gear.

The sessions include practical exercises staged at Nai Yang Beach.

“Tomorrow, trainees will be divided into three teams for their final test, after which those who pass the course will be presented with a certificate confirming that they have successfully completed the lifeguard training course,” Mr Prathaiyuth said.