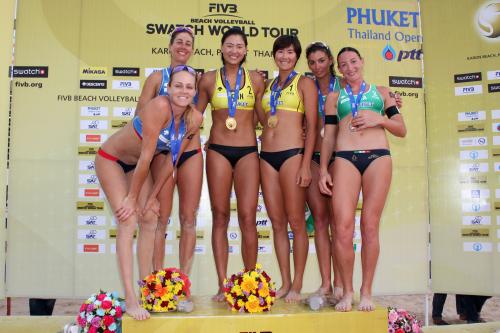 PHUKET: The return of the FIVB Beach Volleyball World Tour to Karon beach Phuket has created plenty of interest among both players and fans.

With the tournament still just under three months away, over 40 teams from 19 countries have already entered the US$75,000 Phuket Thailand Open powered by PTT, which will be held from October 29 to November 3.

Early entries in the tournament have been received from several leading countries such as Canada, Germany and Italy, as well as teams from Australia, Austria, Columbia, Czech Republic, England, Finland, Greece, Japan, Kazakhstan, Paraguay, Spain, Sweden, Switzerland, Vanuatu and Venezuela.

Local interest will be focused on Thailand’s No 1 team of Radarong and Udomchavee. Currently ranked No 42 in the world, the team last month achieved their highest ever finish on the World Tour finishing 5th in the Anapa Open in Russia.

Thailand as host country is allowed two automatic slots in the main draw, with the Thailand No 2 team of Numwong and Hongpak also making their entry into the tournament.

This is the 8th successive year that Thailand has hosted a leg of the FIVB Beach Volleyball World Tour and the event in Phuket is the biggest annual beach sporting event in the Southeast Asian region. Past winners of the tournament in Phuket include the current Olympic Champions, Walsh and May-Treanor from the USA.

The 6-day beach volleyball tournament includes a number of supporting activities including the PTT Schools Cup and PTT Beach Volleyball camps on the finals weekend and a large sponsor activity zone featuring sponsor booths, a beer garden and games and competitions for beach volleyball fans. Admission to the tournament is free throughout the week.

The 2013 FIVB Beach Volleyball World Tour Phuket is proudly sponsored by the Phuket Gazette, PGTV and the nationally televised ‘Phuket Today’ show on True Visions. ‘Phuket Today’, co-produced by PGTV and MCOT World, will be covering this event. The weekly half-hour show runs eight times a week, every week, on channels 99 and 58.

Keep checking the Phuket Gazette’s sports pages, join our Facebook fan page or follow us on Twitter @PhuketGazette for the latest local, national and international sporting news and action.