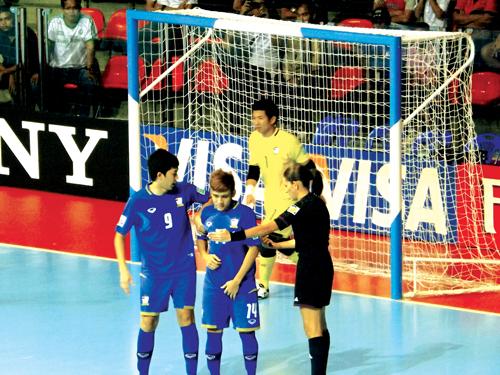 The Zone 2 qualifying groups comprised of ASEAN and East Asian teams, while Zone 1 has West, South and Central Asian teams.

Zone 2 featured two groups, with the top two teams from each group progressing to the semifinals.

Chonburi convincingly beat Chinese outfit Shenzhen Nanling 7-1 in the final on Tuesday (April 16). Both teams had already qualified for the final stages of the tournament to be held in Nagoya, Japan in August.

With qualification guaranteed, Chonburi rested their star player Kritsada Wongkaeo, but even without him the Thai champions controlled the game.

Defender Lertchai Issarasuwipakorn gave Chonburi the lead in the second minute and they were 3-0 up by halftime. Chonburi’s Suphawut Thueanklang’s hatrick in this match took him level at the top of the scoring chart with team mate Kritsada Wongkaeo on eight goals.

Shenzhen scored a consolation goal in the 28th minute.

When Phuket United faced Chonburi in last season’s Thai Futsal Premier League, the Andaman Pearl lost 3-2 at home and 5-1 away (click here for story). Chonburi won the league by 18 points.