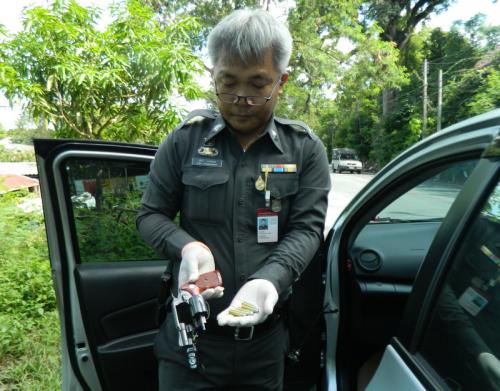 PHUKET: Phuket City Police in hot pursuit of a drug suspect yesterday finally arrested their man after hauling him out of a fish pond in Rassada.

Police were alerted to the suspect when officers at a checkpoint on Palian Road in Phuket Town saw a new Toyota Vios, still bearing red license plates, pull over just short of the checkpoint at about 3pm.

The officer’s suspicions grew when they saw the driver get out of the vehicle and run off on foot.

Officers gave chase and reported the incident to police headquarters.

Phuket City Deputy Superintendent Chao Pormna quickly rallied a team of officers and police volunteers and cordoned off the area.

Failing to find the suspect, they began a sweep through the residents’ yards and pockets of uncleared undergrowth in the surrounding area.

After fishing him out of the lake, officers found 10 pills of ya bah (methamphetamine) in the pockets of his wet shorts.

Police also searched the abandoned car and seized as evidence a .38mm handgun with five bullets and a plastic zip bag containing 10 grams of ya ice (crystal methamphetamine).

While the police escorted Mr Subthawee from the scene, he reminded the officers that he had left his t-shirt and shoes under a nearby house before he dove into the pond. The officers obliged and collected the belongings