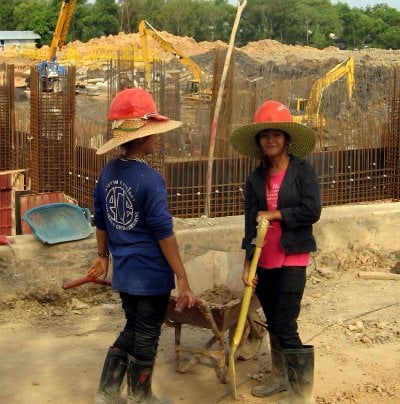 PHUKET: Labor Day in Phuket has been an active one for a group of local laborers demanding special attention from the government.

Vice Governor Weerawat Janphen yesterday presided over a job fair themed “Phuket Laborers Unite for the Environment, against Drugs” at the Phuket HomeWorks Supercenter on the bypass road.

Many employers took part in the event, accepting applications for a reported 1,500 job vacancies.

Printed on a large poster was their prime request: An increase in the daily minimum wage rate to match the rising cost of living.

The current minimum wage in Phuket is 221 baht per day, the highest in Thailand.

The workers also called for pricing controls on household essentials, as well as strict enforcement of labor law and immediate expulsion of illegal immigrant workers from the country.

Furthermore, they asked the closing time of entertainment venues to be extended to 2am and, if possible, to consider establishing Phuket province as a special administrative area. Such a move would be practical given Phuket’s special status as a prime regional tourist destination, they said.

Cabinet recently approved to make Mae Sot the third, while Koh Samui is under consideration for special status.