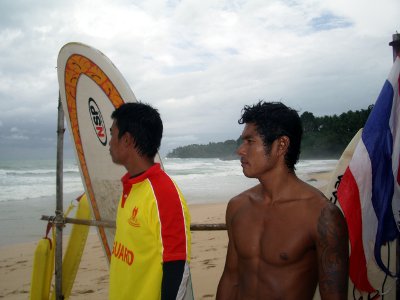 PHUKET: Although no drownings were recorded at Phuket beaches over the past month, the president of the Phuket lifeguard organization today warned tourists to beware of strong rip tides.

“Over the past few days, there have been big waves with strong underwater currents,” said Prathaiyuth Chuayuan, president of the Phuket Lifeguard Service (PLS), which is contracted to provide lifeguard patrols on Phuket beaches.

“Red flags have been posted in danger zones and the monsoon season is coming,” he warned.

“Earlier this month, there have been days without large waves on the surface, but there have been underwater currents. So do not rush into the water. Ask a lifeguard where it is safe to swim,” Mr Prathaiyuth advised.

The warning comes after the PLS completes its first month under its new annual contract to patrol the beaches, with no drownings recorded from April 2 to May 1.

However, many swimmers required lifeguard assistance during the period.

According to PLS records, 66 Thais and 38 foreigners needed help at Ya Nui, Nai Harn, Kata Noi, Kata and Karon beaches over the month.

People being caught in rip tides was the major cause of incidents, with 47 Thais and nine foreigners needing lifeguard help.

Other incidents stemmed from people stepping on sea urchins and sharp rocks, being stung by jellyfish and being hit by large waves.

Jellyfish stings accounted for half the help rendered at these west coast beaches, with four Thais and 24 foreigners being stung, with rip tides, sharp glass and jet-skis named as the causes of the remaining incidents.

Jellyfish stung one Thai and two foreigners, while the other swimmers were caught by rip tides and hit by big waves.