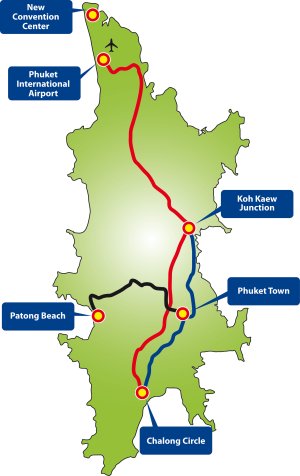 PHUKET: Plans for a light rail system spanning Phuket have been scrapped in favor of the much cheaper option of scheduling new bus routes, it recently emerged.

“We will no longer refer to this project as the light rail or monorail system project,” said Phuket Governor Wichai Phraisa-ngop. “We will now refer to it as the Bus Rapid Transit system project.”

Gov Wichai was speaking as chairman of the Phuket Provincial Traffic Planning (PPTP) subcommittee, which last met on Tuesday.

“The plan can now go forward with a much smaller budget,” Gov Wichai said.

Under the old plan three light rail lines would have been run.

The first would have connected Phuket International Airport with Chalong Circle.

The second would link Phuket Town to Patong.

The third route would run from Bang Khu Intersection (where the bypass road meets Thepkrassatri Rd) to Chalong circle.

It is likely the Bus Rapid Transit network would cover similar routes.

Mr Paiboon said the PPAO, which already operates the pink photong buses in Phuket Town, will carry out a study of the failings of Phuket’s current transportation system.

It will also develop strategies to encourage people to make more use of public transportation.

A forthcoming meeting between the PPAO, the PPTP and the Phuket Land and Transportation Office will continue discussions of the Bus Rapid Transit system.