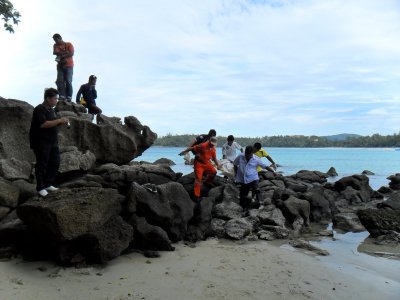 PHUKET: Police are investigating the murder of a Burmese man found lying dead in shallow water off Kata Beach in Phuket yesterday.

Chalong Police were informed by local residents that a body was discovered in the water at the south end of Kata Beach at about 8am yesterday.

Arriving at the scene, they found the body of an Asian man below the water surface about five meters from a rocky outcrop.

A crowd gathered to watch rescue workers from the Phuket Ruamjai Kupai Foundation and Karon Municipality recover the body of the man, probably in his early twenties.

Initial examination found a single slash wound to the left side of the neck, but no other obvious signs of trauma.

Initial questioning of people in the area failed to determine the identity of the deceased.

At about 9:30am a woman,who happened to come by, said the body was that of a Burmese man known only as “Ya”, who worked with her at a nearby tom yum kung noodle shop.

The deceased’s female partner, also Burmese, had been out looking for him with friends since midnight the night before after he failed to return to their shared room.

Police suspect romantic jealousy may have been a motive for the killing because the late Mr Ya was known to have another lover, also Burmese.

Chalong Police Deputy Superintendent Boonlert Onklang said Mr Ya had worked legally at a well-known noodle shop in the area for over two years.

A Burmese woman seen with Mr Ya in the same area the night before has since fled.

She was an attractive woman who had many men interested in her, Mr Boonlert said. However, investigators are not ruling out other possible motives, he added.

A pool of dried blood, a bloodstained knife and a mobile phone found on a nearby rock indicate Mr Ya was killed in the same area.