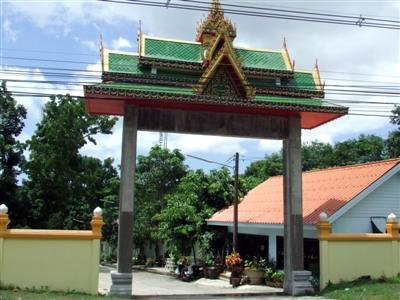 Monks at the well-known Rasadaram Temple, located off the bypass road in Rassada, reported the theft early yesterday evening.

The burglary occurred in the monks’ cell area while they were attending a service that began at 6:30pm in the main prayer hall.

An unknown thief or thieves used the opportunity to pry open a window and gain access.

Upon returning to his cell, one of the monks noticed a collection box lying on the floor, its 50,000 baht in proceeds missing.

In the next room numerous Buddha images were missing and those that remained were scattered on the floor.

The temple abbot put the value of the heist at one million baht.

Phuket City Police are investigating the theft and have already taken fingerprints.

The temple has been targeted by thieves before, but in the past they ran away when spotted by temple monks.

It is not the only time thieves have targeted a temple in Phuket.

In October last year a drunk was arrested at Nai Harn Temple after he attempted to steal a collection box there. The man later confessed to committing a string of similar thefts at other island temples.

He also led police to an employee at the Government Savings Bank who served as an accomplice in some of the heists. The pair used the proceeds to fund drinking sessions in karaoke bars, they said.

In Thailand temples are seldom targeted by thieves – and not only for ethical reasons.

Most Thai temples are home to large packs of stray dogs, many dumped there by their former owners. The dogs also serve as a potent security force for their Buddhist benefactors.

In another disturbing crime carried out at a temple on a holy day last year, well-known local businessman Chalermpol Pranweerapaiboon was left in a coma after he was shot in the back of the neck by an assailant at Wat Luangpoo Supha on Maka Bucha Day in February 2009.

The attack took place in front of the victim’s family and just meters from the cell of Luangpoo Supha, a revered monk believed by his followers to be the world’s oldest living man at 116.

Although Phuket City Police initially said the investigation was going well, there have been no reports of any arrests in the case.